The $1.5 million monument, which was finished in April, was unveiled Saturday in Buffalo after six years of planning.

The African American Veterans Monument (AAVM)  — the first of its kind  — has been erected at the Buffalo and Erie County Naval & Military Park, The Buffalo News reports.

The $1.5 million monument was unveiled Saturday in Buffalo, New York, after six years of planning. Construction was completed in April.

Galloway, who is president of the board of directors at the African American Veterans Monument, and New York State Assembly Majority Leader Crystal Peoples-Stokes led a committee that spearheaded the project.

From the designs of late local artist Jonathan Casey, a creative team from the local design firm, Solid 716, constructed the monument. It comprises 12 black concrete columns — standing 10 feet high and 3 feet wide — placed in chronological order, “corresponding to the dates that each of the country’s 12 military conflicts took place,” according to the AAVM website. The spaces between the columns represent the times of peace between wars. 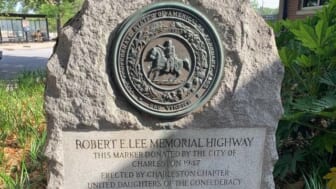 The tops of the pillars light up at night, representing the practice of families placing candles in windows to guide their loved ones home from war. The lights will continue to glow to serve as a reminder of the sacrifice of Black veterans.

The News reports that visitors can download a smartphone app that will allow them to read and hear information in the pillars.

“There’s not a war this country has ever been in that somebody who looked like me wasn’t on the frontlines. Not ever,” Peoples-Stokes told WGRZ-TV at the unveiling ceremony, which
New York Gov. Kathy Hochul and Buffalo Mayor Byron Brown also attended. “And they’re going to understand that because school children are going to take visits to this monument not just from Buffalo and Western New York but around the world.” 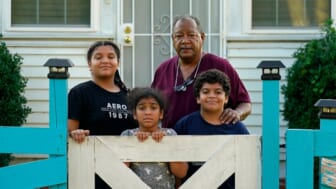 The columns hold a combined 5,000 bricks that currently display 550 names of African Americans who have served in the military and fought in every American war to date. The unmarked bricks are for sale for $250 each on the AAVM website.

The African American Veterans Monument is the latest addition to the military park. Among other monuments are those honoring Hispanic Americans, Polish Americans and veterans of the Persian Gulf wars.