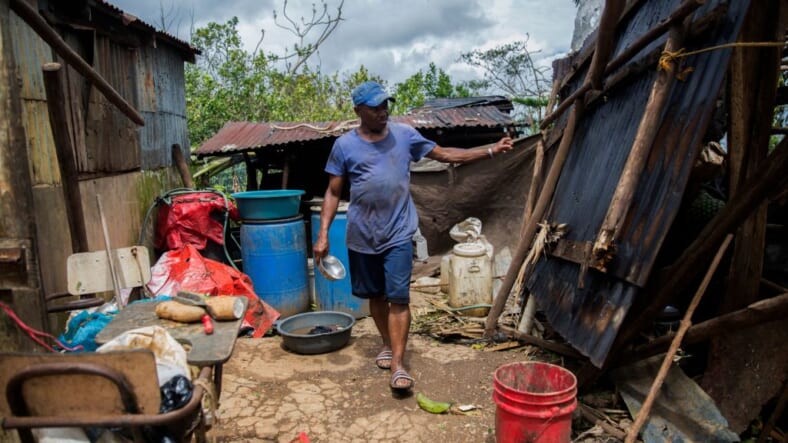 A man checks damages in a house near the highway connecting Miches with El Seibo in the northeast of the Dominican Republic on September 21, 2022 after the passage of Hurricane Fiona. (Photo by ERIKA SANTELICES/afp/AFP via Getty Images)

As the storm season accelerates, the inequities of the climate crisis are on stark display from coast to coast. In Puerto Rico, devastating floods from Hurricane Fiona destroyed homes and livelihoods, and the majority of the island remains without power. In Florida, dangerous storm surges and winds from Hurricane Ian, the fifth strongest hurricane to strike the mainland United States on record, continue to inundate entire communities. In Western Alaska, a recent typhoon washed away roads, knocked out communications, and left small, primarily Indigenous communities along the coast without critical food and other supplies as winter approaches.

This is climate change—and it is hitting poor communities and communities of color the hardest and in ways that will have long-term effects. Ocean justice is one solution to the climate crisis, and we need it now more than ever. 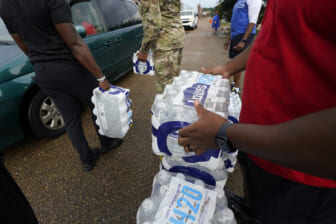 Ocean justice communities—that is to say, communities of color and/or low-income communities along our coastlines—have been systematically excluded from power, under-resourced, underserved, marginalized and overburdened with the health and environmental burdens of industrialization and development. As a result of centuries of racism and colonialism, these communities are on the climate frontline, as we are so tragically seeing in the Caribbean, Alaska and Florida.

The United States needs to do better. That is why we established the Ocean Justice Forum, a collective of 18 environmental justice, Indigenous, community, and national nonprofits that came together to create a new approach to coastal policy that puts these communities at the center of decision-making—and that is what we’re calling “ocean justice.”

It’s not solely about climate. Pollution, overfishing, loss of habitat and biodiversity, and gentrification also threaten livelihoods and cultures. Yet, as is predictable, rarely are ocean and coastal policies shaped by leaders and experts from ocean justice communities, both when it comes to who is inside the government and who has the ear of policymakers. For example, in 2021, it was reported that 73.1 percent of environmental group leaders in the U.S. are white.

Over the last year and a half, we have been gathering to develop a consensus vision of what a just ocean future should look like. It wasn’t easy. Along with this country’s extensive coastline comes an enormous diversity of economies and cultures. Participants hailing from Massachusetts, New York, and California to Louisiana, Alaska, and the Pacific islands came together to find common ground, define ocean justice, and develop not only a consensus policy platform but principles for how to develop and implement ocean policy.

But it worked. This month, we released a first-of-its-kind Ocean Justice Platform that puts forward an ambitious and necessary vision for strengthening ocean climate policy, addressing injustices and building stronger and more resilient communities. In the name of ocean justice, the platform details how we can collectively create more inclusive and equitable policy solutions by enabling full participation and leadership of historically excluded Peoples and BIPOC communities in ocean decision-making.

From expanding ocean protections and ensuring equitable access to ocean resources to alleviating the disproportionate burden of pollution and uplifting justly sourced renewable energy, the platform sets clear priorities to guide policymakers’ approach to just ocean policy. It also calls for decision-makers to prioritize community social cohesion in disaster response and adaptation investments. For too long, ocean justice communities have not had adequate support and representation as they face rising tides and stronger storms. This needs to change if they are to make their own short and long-term decisions in a changing climate.

This is far from academic. Ocean injustices—from air pollution inflicted on poor communities near ports to inequities being reinforced in hurricane recoveries to how fishing rights and coastal access are distributed—continue to happen in real time. Take the recently passed Inflation Reduction Act. While the bill made historic investments in climate solutions and is critical to setting the U.S. on the path to achieving its climate goals, its passage came at the cost of leasing yet more of the Gulf of Mexico and Alaskan waters to drilling. And if the “side deal” to weaken federal energy permitting processes—which could still be attached to must-pass legislation this year—became law, pollution-burdened communities on our coasts and elsewhere could be even further affected.

But what if all this went in a different direction? What if ocean policy did right by ocean justice communities? The Ocean Justice Platform presents the environmental movement and policymakers with a new path—one guided by principles of inclusivity, equity and accountability.  It’s time to see where it leads.