Even after seeing the effects of concussions in real time, football fans still can’t look away

OPINION: The video of Tua Tagovailoa's reaction after suffering severe head trauma is a stark reminder of football’s addictive violence and the potential consequences. Yet, football's viewership has never been better. 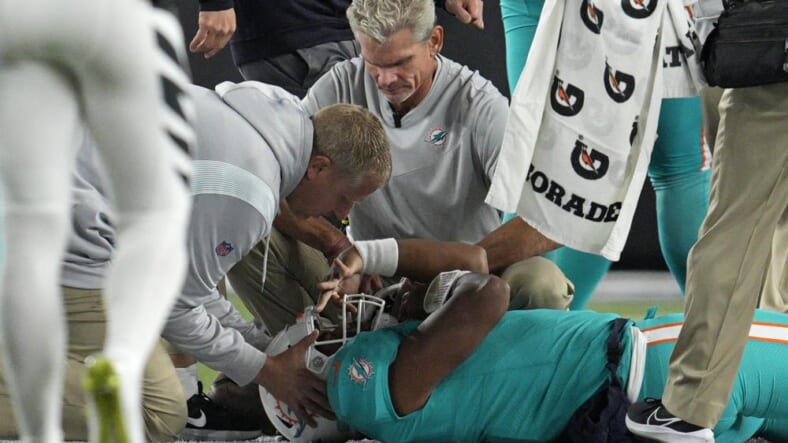 Miami Dolphins quarterback Tua Tagovailoa is examined during the first half of the team's NFL football game against the Cincinnati Bengals, Thursday, Sept. 29, 2022, in Cincinnati. (AP Photo/Jeff Dean)

Despite concerns in some quarters about hiring practices, social justice, domestic violence and sexual assaults, the NFL continues to dominate televised entertainment. Last year, NFL games were 48 of the country’s top 50 shows and 91 of the top 100. CBS reports that games are averaging 18.55 million viewers this season, the network’s best start since 2010.

Congrats to everyone who stopped watching due to any aforementioned reasons. You’re clearly stronger than us who haven’t turned away since Colin Kaepernick was blackballed, Deshaun Watson was rewarded and Brian Flores and them were mistreated.

Tua Tagovailoa getting concussed is unlikely to make a difference.

The Miami Dolphins QB suffered a scary concussion on Sept. 29 against Cincinnati, but we won’t change our viewing habits. Just in case though, the league is adjusting to ease any pangs of guilt. Tagovailoa set a meeting with representatives from the NFL and the players union to review his injury evaluation on Sept. 25 against Buffalo, when he staggered and fell while walking to the huddle after a play.

The  Dolphins say our eyes lied and a back injury caused Tagovailoa’s rubbery legs. Yeah, right. He passed a neurological evaluation at halftime (a doctor was subsequently fired) and played without event through the game’s end. The NFL tightened up the following week when at least a dozen players were removed from games under concussion protocols.

Only three players fell in that category during Week 3, although Tagovailoa should’ve made it a quartet.

In foresight and hindsight, allowing him to return was a poor decision, reinforced by his graphic injury last Sunday. After his head slammed into the ground during a sack, Tagovailoa laid prostrate and tensed in a fencing response, the classic symptom of a concussion.  Replays and high-def close-ups of his fingers, flexed awkwardly in unnatural positions, were plentiful and controversial.

But mostly they were an honest, stark reminder of our deal with football’s addictive violence and the potential consequences.

Cincinnati Bengals QB Joe Burrow, who admits to being hit “where I don’t remember the second half or I don’t remember the entire game,” suspects every player has suffered a concussion. “You can make all the rules you want to make the game as safe as you possibly can, but there’s an inherent risk and danger with the game of football,” Burrow said on Colin Cowherd’s podcast. “… It’s part of the game, I think. Part of what we signed up for.”

It’s a deal players make as active participants. It’s a deal we make as supportive enablers—fans, officials, coaches, media, friends, and family. Yes, catastrophic injury can occur in a snap, whether revealed in real time or years later. Sure, Miami failed to protect Tagovailoa in the game before he was carted off. But the risk is there EVERY game. So are we.

“I think concussions are a part of contact sports,” Tampa Bay QB Tom Brady said on his “Let’s Go” podcast. “I watch boxing, and I watch UFC. People are knocked out quite a bit. That’s part of playing these very physical sports. All of them come with risks associated with it. And I think when you’re an athlete that chooses to do that you gotta understand that’s part of it, just like you can injure other parts of your body as well.”

I understand why some folks, including some friends, have kicked the NFL habit. But they should abstain from Power 5 college football, too, because the NCAA is no better. While they’re at it, prep football might merit similar aversion. And you know pee-wee programs can be wild and out of control.

Football is football, problematic enough without carving it into pro, college, and youth slices.

Nearly 70 percent of NFL players are men of color, likewise nearly 65 percent of college players in Power 5 conferences. That’s a lot of sons and nephews, dads, uncles and play-cousins who started the sport as children. Say what you will about the deal they’ve accepted, but they line up for kickoffs every week of the season. You gonna leave them hanging?

I won’t. Imma pray for everyone’s safety and watch the game.

Football generates mixed feelings within, but I’ll continue to support those boys and men who suit up. There are too many good people involved—on the field and on the sidelines—to unequivocally dismiss their pursuits. While health risks are a serious concern, there also are legitimate benefits of playing. Lives are saved, figuratively and literally, thanks to coaches, teams and support systems that can keep a player on the field. Scholarships are awarded, and degrees are earned.

At the highest level, seeds of generational wealth are sown, though sometimes costing the planter’s life.

I don’t want Tagovailoa to play again. Famed neuropathologist Bennet Omalu, portrayed by Will Smith in “Concussion,” is among those suggesting immediate retirement. He believes the 24-year-old suffered severe, long-term permanent brain damage. “Stop. Hang your helmet and gallantly walk away,” Omalu said via TMZ Sports.

We hope Tagovailoa listens, but we’ll still watch if he doesn’t.