The 43-year-old Cormier retired from MMA following his 2020 loss to Stipe Miocic in a bout for the UFC heavyweight championship.

Daniel Cormier got physical as a guest WWE referee. He used a fist to the throat to pin Seth Rollins against the steel cage, and he issued a stern warning not to mess with the former MMA great.

After the match held inside a Fight Pit, Cormier chilled backstage with a replica championship belt and playfully declared he might not be done with WWE.

“I’m defending this thing on the way out,” Cormier said. “Bam! Right upside the head.”

Cormier laughed at the idea of knocking out a wrestler out with a belt. But the thought of the UFC Hall of Fame fighter following in the path of Ronda Rousey, Matt Riddle and others who crossed over from mixed martial arts to professional wrestler is a very real one for Cormier.

The lifelong fan — Randy Savage was his all-time favorite — wore a traditional referee’s uniform for his role in the match between Riddle and Rollins at the WWE “Extreme Rules” card Saturday night at the Wells Fargo Center. Cormier got in Rollins’ face here and there but largely stayed out of the fray in a fight won by Riddle — who spent five years with UFC — by submission.

“Those guys are so talented,” Cormier said in an interview with The Associated Press. “They knew exactly what they were going to do and I was just trying to stay out of the way. I didn’t want to get in the way and mess something up.” 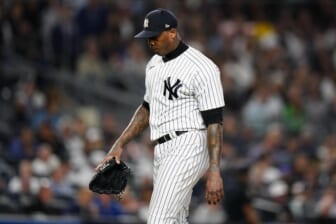 The 43-year-old Cormier retired from MMA following his 2020 loss to Stipe Miocic in a bout for the UFC heavyweight championship. While Cormier did break his own deadline of not fighting past his 40th birthday, he largely left the sport on his own terms. Cormier simultaneously held the UFC heavyweight and light heavyweight championships, won championships in other MMA promotions, and built a reputation as one of the sport’s good guys. He’s a businessman and a burgeoning actor, and he stayed in the UFC game as a commentator with Joe Rogan for the biggest fight cards.

“I’m still a part of the show,” he said. “Then you do something like tonight and you get the crowd yelling for you, screaming.”

The reaction just tugs even more at his pro wrestling pull.

Like some of wrestling’s greats, Cormier is pretty good on a microphone and tried for years to bait Brock Lesnar into a fight inside the UFC cage. Lesnar started in WWE before he jumped to UFC and won the heavyweight championship and then returned to WWE and became one of the company’s biggest stars. Cormier took the mic after he beat Miocic in July 2018 and issued a challenge to Lesnar.

“I never thought I would fight him, but Brock Lesnar, get your ass in here,” he said as the Las Vegas crowd roared.

Lesnar entered the cage and the fighters postured and pushed each other in some made-for-TV entertainment. Lesnar grabbed the mic and bellowed, “DC, I’m coming for you!” Cormier then ordered Lesnar to “get out of my octagon, I’ve got some pictures to take.”

Alas, the dream fight between the hulking heavyweights never happened in UFC.

But now, inside a WWE ring, where Lesnar is still a box office draw? Anything is possible.

Cormier said the matchup does intrigue him, but not right away.

“I’ve been retired for a couple of years and I look like it. But I’d have to get in shape if I ever want to do something like that,” Cormier said. “The door is not closed on anything right now in my life.” 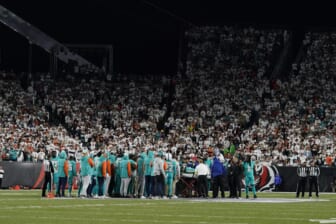 Cormier had UFC President Dana White’s blessing to dabble in WWE. WWE chief content officer Paul “Triple H” Levesque tweeted that Cormier “looks right at home inside the Fight Pit,” which was a fancy name for a steel cage match.

“You just hope that you did a good enough job that they ask you back,” Cormier said.

Cormier, who said he has no future commitments with WWE, is scheduled to soon start shooting his role in the “Warrior” TV series slated for the Paramount+ streaming service. But he’s ready to take the call to return to the squared circle and tangle with Lesnar, Rollins or any WWE star, if needed.

“I’m still at an age where there are some opportunities, but those opportunities need to start now if they’re going to be something I pursue,” he said.