West taped an episode of the LeBron James-produced YouTube talk series and doubled down on recent remarks on social media that have been perceived by some to be anti-Semitic.

An episode of “Uninterrupted The Shop” featuring Kanye West will no longer run following his alleged rants of “more hate speech.” LeBron James and Maverick Carter are the producer of the YouTube series.

On “The Shop”, James and Carter often talk with celebrities, athletes and thought leaders inside a barbershop about personal and provocative subjects. The show has featured Draymond Green, Drake, Donald Glover, Jay-Z, Jerrod Carmichael, Barack Obama and others.

West has been in the news over his use of seemingly anti-Semitic language on social media. One such incident came on Saturday when he posted, “I’m going death con 3 On JEWISH PEOPLE,” according to The Hollywood Reporter. The post has been removed.

Carter issued a statement, disclosing that the episode would not air. He indicated that he hoped that West would discuss his statements, but instead doubled down on them.

“Yesterday we taped an episode of “The Shop” with Kanye West. Kanye was booked weeks ago and, after talking to Kanye directly the day before we taped, I believed he was capable of a respectful discussion and he was ready to address all his recent comments. Unfortunately, he used “The Shop” to reiterate more hate speech and extremely dangerous stereotypes.” 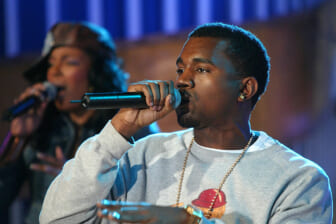 Carter continued, “We have made the decision not to air this episode or any of Kanye’s remarks. While “The Shop” embraces thoughtful discourse and differing opinions, we have zero tolerance for hate speech of any kind and will never allow our channels to be used to promote hate. I take full responsibility for believing Kanye wanted a different conversation and apologize to our guests and crew. Hate speech should never have an audience.”