Police officers from Warren, Michigan, allegedly struck Tyler Wade so hard that one of his braces came out of his mouth.

A Detroit-area teen has filed a federal lawsuit against police after they allegedly attacked him repeatedly in an incident captured on video.

According to the Detroit Free Press, police officers from Warren, Michigan, allegedly punched, kicked and stomped Tyler Wade, now 17, following a chase on June 2. Wade’s attorney, James King, said his client had no criminal history or prior interactions with law enforcement. The incident was reportedly captured on police body camera and dashcam footage and recorded by a civilian.

King claimed that one officer hit Wade nine times in the face without another official intervening. He said Wade also received multiple punches from another cop, and his client was kicked twice and stomped at least three times.

Body camera and dashcam footage requested as discovery in the criminal case reportedly showed the “nightmare” unfold just as Wade described, King said. According to King, his client followed all directions.

“People don’t get beat like this and stomped and assaulted and savagely attacked by grown men when they commit crimes,” King told the Free Press. “This video is sickening.”

King claims Wade tried to evade police by speeding away after they stopped him on the suspicion he was driving a stolen vehicle. Police allege that Wade had marijuana and threw a gun out of the car — accusations that King denies.

According to King, the pursuit ended when the car finally stopped after crashing into a corner and its stop sign. Wade was handcuffed and taken into custody.

Before the arrest, officers allegedly approached the car aiming their firearms at Wade. They reportedly went into Wade’s car without an explanation and used excessive force to remove him.

The lawsuit alleges that after aggressively yanking Wade out of the car and onto the pavement, the officers “proceeded to viciously assault” him, repeatedly punching, kicking, stomping and kneeing him. Footage of the incident seems to confirm that.

Officers allegedly struck Wade so hard that one of his braces came out of his mouth. According to the complaint, he now suffers regular, severe headaches, the possibility of long-term vision loss, and facial scars.

Given that Wade is Black and all the police officers appear white except for one, King said he believes racism played a part in what happened. 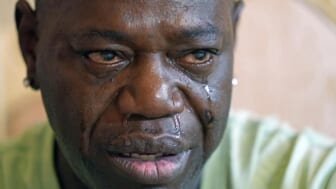 “People who have committed far worse crimes than Tyler Wade have been arrested by police in the city of Warren and other cities like the city of Warren, and they do not look like Tyler did at the conclusion of that arrest,” King said, per the Free Press.

The lawsuit King filed names six police officers, identified in the case only by their last names and badge numbers, as well as the city of Warren and its police department. The Free Press said it has been seeking comment on the lawsuit from police and city officials. The complaint did not contain a request for damages but noted that Warren police might expect a request for close to $20 million.