Wendell Pierce, LaTanya Richardson Jackson to be honored at AAFCA’s Salute to Broadway

Wendell Pierce and LaTanya Richardson Jackson are among the honorees selected for the African American Film Critics Association’s (AAFCA) inaugural Salute to Broadway.

Actor John Douglas Thompson (“Till”) will also be honored, according to Variety.

“It’s no secret that some of our greatest actors have come from the stage or have tested their chops on it,” said Gil Robertson, AAFCA’s co-founder. “Sidney Poitier, Ruby Dee and Ossie Davis are just a handful of our beloved icons for which this was true, with Tony winners Denzel Washington, Viola Davis, Audra McDonald, Adrienne Warren and Myles Frost among those continuing that legacy.”

Pierce, who is currently starring in “Death of a Salesman” on Broadway, will receive the Beacon Award. Richardson Jackson, director of August Wilson’s “The Piano Lesson” starring her husband Samuel L. Jackson and John David Washington, will be given the Vanguard Award. Thompson, known for Shakespearean roles, will get the Distinguished Achievement Award.

“Topdog/Underdog,” Suzan-Lori Parks’ Pulitzer-winning play, will get the Spotlight Award. A revival of the play starring Corey Hawkins and Yahya Abdul-Mateen II is currently on Broadway.

Besides Pierce’s history-making turn in “Death of a Salesman,” he has numerous TV and film credits, including “The Wire,” “Treme,” “Jack Ryan” and “Selma.” With “The Piano Lesson,” Richardson Jackson achieves two milestones. It marks her Broadway directorial debut and she is the first woman to direct a Wilson play on The Great White Way. 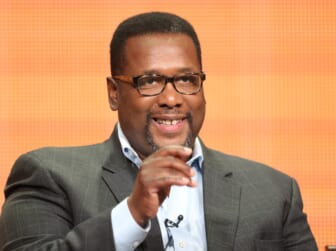 Also Read:
Wendell Pierce calls his role in a Black-led ‘Death of a Salesman’ cast a ‘watermark’

Debra Martin Chase, producer of the CBS drama series, “The Equalizer,” noted that the cross-connection of different acting mediums is what makes Salute to Broadway stand out. “The intersectionality that exists between the theater, TV and film communities needs to be celebrated,” she said. “I am absolutely thrilled that AAFCA continues to do the work of championing artists in these spaces.”

The Salute to Broadway ceremony is scheduled for Oct. 17 at New York’s The Lambs Club.