Egonu gets support from Draghi after racist abuse

On Saturday night, Egonu appeared to have rethought her decision to quit the national team.

A video emerged of Egonu talking to her agent and crying immediately after Italy beat the United States to take bronze at the world volleyball championship on Saturday.

It was not immediately clear who Egonu, who is black, was referring to but Italian volleyball federation president Giuseppe Manfredi clarified on Sunday that she had been racially abused on social media after Thursday’s semifinal loss to Brazil.

Draghi’s office posted a message on twitter on Sunday.

“Full support to the volleyball champion Paola Egonu from President Draghi in this morning’s phone call,” it read. “The national athlete is a source of pride for Italian sport, she will have future chances to win more trophies wearing the national team shirt.” 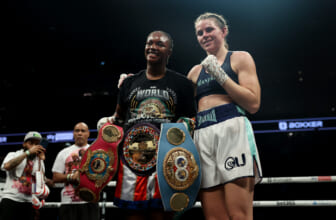 On Saturday night, Egonu appeared to have rethought her decision to quit the national team but the 23-year-old did say she needed a break.

“At the moment what I feel is that I need to take a step backwards, I hope that I’ll rethink this in a few months, because we still have a lot to do with this national team. I’ll let you know in January.”

The Italy team is not scheduled to gather again until April.