Section 241 of the Mississippi Constitution strips voting rights from people convicted of 10 felonies, including forgery, arson and bigamy.

The Mississippi Center for Justice is petitioning the Supreme Court two months after the 5th Circuit Court of Appeals struck down its lawsuit challenging voting restrictions set forth in Mississippi’s 1890 state constitution. If successful, the lawsuit could grant voting rights to thousands of people permanently banned from casting ballots as a result of felony convictions.

“At a time when our state and nation are struggling with the vestiges of a history of racism, it is important that the United States Supreme Court step in to address this remaining vestige of the malicious 1890 plan to prevent an entire race of people from voting in Mississippi,” said Rob McDuff, the attorney who brought the lawsuit for the Mississippi Center for Justice.

Section 241 of the Mississippi Constitution strips voting rights from people convicted of 10 felonies, including forgery, arson and bigamy. The state attorney general issued an opinion in 2009 that expanded the list to 22 crimes, including timber larceny, carjacking, felony-level shoplifting and felony-level bad check writing.

Attorneys who challenged the provision had argued the authors of the state’s Jim Crow-era constitution showed racist intent when they chose which felonies would cause people to lose the right to vote, picking crimes they thought were more likely to be committed by Black people.

The lawsuit dates back to 2017. In a news release, MCJ said it filed the suit on behalf of two Black men — Roy Harness and Kamal Karriem. Harness is a military veteran who was convicted of forgery in 1986 and Karriem is a former Columbus city council member who was convicted of embezzlement in 2005, the organization said. Both men served their sentences but still cannot vote. 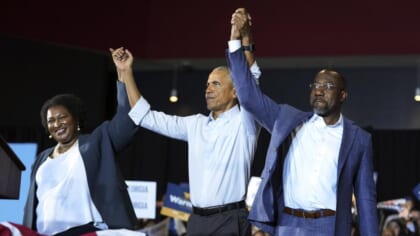 In their August ruling, a majority of 5th circuit judges said the plaintiffs “failed to meet their burden of showing that the current version of Section 241 was motivated by discriminatory intent.”

“In addition, Mississippi has conclusively shown that any taint associated with Section 241 has been cured,” the majority wrote.

Seven judges of the 17-member panel dissented. Judge James Graves — who is Black and from Mississippi — wrote that the majority of the appeals court had upheld “a provision enacted in 1890 that was expressly aimed at preventing Black Mississippians from voting” and that the court had done so “by concluding that a virtually all-white electorate and legislature, otherwise engaged in massive and violent resistance to the Civil Rights Movement, ‘cleansed’ that provision in 1968” by adding crimes that were considered to be race-neutral.

In 1950, burglary was removed from the list of crimes that would strip people of voting rights. Murder and rape were added to the list in 1968. Attorneys representing Mississippi argued those changes “cured any discriminatory taint on the original provision.”

Under the state constitution’s original provision, lesser crimes the authors thought were more likely to be committed by Black people stripped people of voting rights, while murder and rape did not.

To regain voting rights in Mississippi now, a person convicted of a disenfranchising crime must receive a governor’s pardon or must win permission from two-thirds of the state House and Senate. Legislators in recent years have passed a small number of bills to restore voting rights.