TheGrio/KFF survey shows that most Black voters say the Court’s recent decisions have been a step backward on racial equity, women’s rights, voting rights, and climate.

Just weeks into the 2022-2023 session of the United States Supreme Court, a new survey conducted by theGrio and KFF shows a majority of Black voters say the Court’s recent decisions have been a step backward on racial equity, women’s rights, voting rights, and climate, and about half (51%) say these decisions will ultimately hurt Black people.

The Survey of Black Voters, a partnership between theGrio and KFF, a nonprofit organization focused on research and analysis of health and other national issues, interviewed 1,000 registered voters who identify as Black or African American from Aug. 24 to Sept. 5, 2022.

When it comes to women’s rights, particularly abortion, the survey found that 81% of Black voters said they disapprove of the Supreme Court overturning Roe v. Wade in its Dobbs v. Jackson decision earlier this summer, a share that is similar across gender, age, education, and income groups.

Do you (approve) or (disapprove) of the Supreme Court overturning Roe v. Wade?

Alexis McGill Johnson, president of Planned Parenthood Action Fund, told theGrio that “Black voters understand that losing the right to abortion is a matter of racial and economic justice.”

Johnson recognized states across the south and midwest moved quickly to ban abortion, as it “has been acutely felt by Black communities that have been at the margins of all of these issues for generations.” 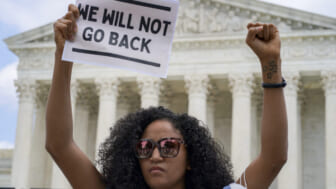 Also Read:
Black voters surveyed by theGrio/KFF think the Supreme Court is politicized and see this as a bad sign for Black people

Survey results reveal that Black voters who identify as Republicans or lean toward the party are more split on the high court decision to overturn Roe v. Wade, with about half approving and the other half disapproving. In contrast, a large majority (87%) of Black voters who are Democrats or lean Democratic disapprove of the decision.

“Black voters know that anti-abortion politicians are hellbent on stripping away their reproductive rights while failing to address the lack of access to health care or other resource inequities that are vital to raising safe and healthy families — and they will remember that in November,” added McGill Johnson.

But not all Black voters are against the Supreme Court’s ruling on abortion. Twenty-seven percent of Black voters identifying as evangelical Christians approved of Roe being overturned. That compares to 72% of white evangelicals who approve of the high court’s decision as measured by another KFF poll of all adults in September.

Melanie Campbell of the Black Women’s Roundtable told theGrio that voting in this year’s midterm elections on Nov. 8 has never been as important. Campbell responded to the survey results adding, “Black women are telling us they are using their voting power to fight for their rights, including the right to control their own bodies and they are also fighting for economic justice and safety in their communities.” 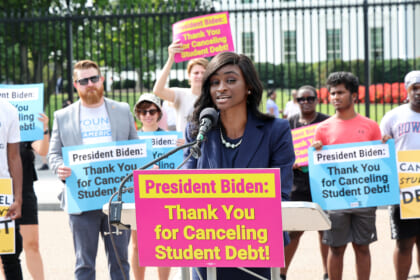 Leon W. Russell, chair of the National Board of Directors at NAACP, also touted the power of the Black vote in light of theGrio/KFF survey results, particularly regarding racial equity.

“Ignorance, hate and otherism can only be defeated by a community that is awake and aware of the power we have when we decide that we will work together. We have the power and we must use it. Vote,” said Russell.

Do you think recent decisions by the Supreme Court have been a step forward or a step backward when it comes to each of the following?

Russell believes the remedy to issues seemingly going backward under a Supreme Court with a conservative majority is the power of the Black vote. “It is obvious that thinking people who are concerned about the state of the nation recognize that we must come together to use the power of the vote to save this nation and our democracy,” he added.

More findings from the recent theGrio/KFF survey mirror some of the Black leader sentiments in this story. Seven in ten Black voters say they believe that the Supreme Court justices decide cases based on politics and ideology rather than the law. Among Black voters, attitudes toward the Court and its recent decisions differ along educational lines, with those who have graduated college more likely than non-college graduates to believe justices make decisions based on politics and ideology and to see recent decisions as a step backward in various areas.

As decisions made by the Supreme Court, which leans conservative, 6-3, continue to be scrutinized, civil rights and social justice leaders fear more rollbacks of constitutional rights in the near future. Still, Fatima Goss Graves, president and CEO of the National Women’s Law Center, told theGrio that the Court’s minority liberal justices – which includes the newly installed Justice Ketanji Brown Jackson – will still play a crucial role in consequential cases.