Michael B. Jordan, Jonathan Majors and Quinta Brunson will also be honored at the fifth annual award ceremony.

The Critics Choice Association’s (CCA) “Celebration of Black Cinema & Television” honorees have been announced. Berry Gordy, Scott “Kid Cudi” Mescudi and Angela Bassett are among those who will receive awards at the fifth annual ceremony.

Gordy is slated to receive the Icon Award. The founder of Motown Records is being honored for decades of “unparalleled” contributions to music, business and film. Bassett will take home the Career Achievement Award for her lifelong excellence in movies and films.

Mescudi is the Groundbreaker Award honoree. While known mostly for his music, the Grammy Award-winning rapper is being recognized for his work on the Netflix animated series, “Entergalactic” on which he voices the lead character, Jabari. Mescudi also created the series.

“The Celebration of Black Cinema & Television has grown tremendously over the last five years,” said CCA CEO Joey Berlin in a statement. “We’re thrilled to be able to recognize such outstanding projects across both film and television, and to honor these incredible actors and filmmakers for their work.”

Other honorees include Michael B. Jordan, Quinta Brunson, Brian Tyree Henry and Jonathan Majors. Jordan will receive the Melvin Van Peebles Trailblazer Award ahead of his directorial debut, “Creed III.” Brunson gets the Actress Award for Television honor for her character on ABC’s “Abbott Elementary.” Henry is the Supporting Actor Award honoree for his role in the Apple+ film, “Causeway.” Majors earns the Actor Award for Film for his performance in the war drama, “Devotion.” 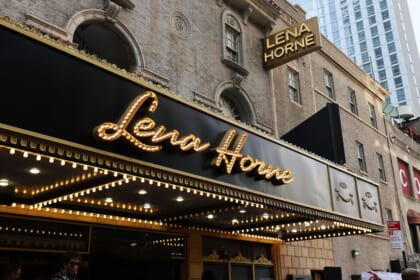 “It has truly been a year to celebrate,” said CCA Board Member and Executive Producer Shawn Edwards in the statement. “The unprecedented amount of content about the Black experience on film and television made it very difficult to choose our honorees for this milestone year.”

Comedian-actor Bill Bellamy is set to host the “Celebration of Black Cinema & Television,” which is scheduled for Dec. 5 at the Fairmont Century Plaza in Los Angeles. The ceremony will air on KTLA in January and show on Nexstar stations nationwide throughout February to celebrate Black History Month.

The CCA was founded in 2019 with the formal merger of the Broadcast Film Critics Association and the Broadcast Television Journalists Association. Its purpose is to recognize the intersection between film, television and streaming content. The CCA created the “Celebration of Black Cinema & Television” to recognize outstanding achievements in Black filmmaking and television.

Her is the full list of “Celebration of Black Cinema & Television” honorees: