Josephine Baker biopic to be written and directed by Maïmouna Doucouré

The film is set to begin production in 2023.

A biopic on the life of the late American singer, dancer and civil rights activist Josephine Baker is on the way, and Studiocanal just announced Maïmouna Doucouré as the film’s director and writer.

The French director, whose first film “Cuties” debuted to acclaim at Sundance, seems to be a perfect fit for a film covering the life of this American-born French performer. Per Deadline, the film also has the support of Baker’s family, including her brothers Jean-Claude Bouillon Baker and Brian Bouillon Baker, as well as her “Rainbow Tribe.” This nickname was given to 12 children she adopted after World War II.

In a joint statement regarding the film obtained by the outlet, the family shared, “Josephine Baker. The universal artist, woman and mother. We are honoured to partner with Studiocanal and collaborate with Maïmouna on this feature film about the incredible and humanist achievements of our mother. Yes she could. And she did. Thank you Mum!”

“It’s a huge honour and also a beautiful challenge to board this project,” Doucouré shared in her own statement. “To think that through fiction I can tell her great and profoundly rich story, her beauty, her fights, her wounds and her humanity. I can’t wait to breathe new life into this incredible legend on screen.”

Baker, born in St. Louis, spent much of her life in Europe and found fame as a cabaret act in Paris from the 1920s to the 1930s. During World War II, Baker supported the French Resistance and was a proud civil rights activist throughout her life before her death in 1975. The film has yet to be cast, but production on the project is set to begin in 2023. 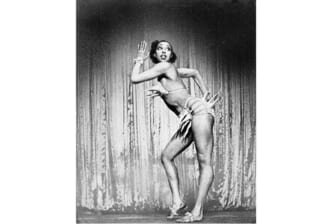 Doucouré is most known for her French coming-of-age movie “Cuties,” which theGrio covered when it debuted on Netflix back in 2020. Despite acclaim following Doucouré’s Directing Award win at Sundance, the film had some controversy regarding Netflix’s marketing campaign surrounding the film, which many accused of sexualizing the young cast. Netflix’s Ted Sarandos issued an apology to the public and to Doucouré following the controversy.