If fuel can leave, that would ease a crisis that began when the G9 gang federation seized control of the area surrounding a fuel depot in Port-au-Prince on Sept. 12 to demand the resignation of Prime Minister Ariel Henry.

Associated Press   |
A fuel terminal is seen from a plane in Port-au-Prince, Haiti, Friday, Nov. 4, 2022. Haiti’s National Police has been fighting to remove a powerful gang that surrounded the key fuel terminal in Port-au-Prince for almost two months — though it's not immediately clear if the blockade has been fully lifted. (AP Photo/Ramon Espinosa
Loading the player...

PORT-AU-PRINCE, Haiti (AP) — A powerful gang leader announced Sunday that he was lifting a blockade at a key fuel terminal that has strangled Haiti’s capital for nearly two months.

The announcement by Jimmy Cherizier, a former police officer nicknamed “Barbecue,” followed government claims of at least some success in efforts to reclaim the terminal, as well as a United Nations resolution targeting Cherizier with sanctions. But it remained unclear who actually controls the terminal and the surrounding area, and there had been no evidence that any fuel had been able to leave.

In a speech posted on social media, Cherizier called on truck drivers to come and fill their tanks.

“Drivers can come to the terminal without any fear,” he said.

If fuel can leave, that would ease a crisis that began when Cherizier’s G9 gang federation seized control of the area surrounding a fuel depot in Port-au-Prince on Sept. 12 to demand the resignation of Prime Minister Ariel Henry.

The gang’s blockade cut off access to about 10 millions gallons of diesel and gasoline and more than 800,000 gallons of kerosene, forcing gas stations to close, hospitals to cut back on critical services and banks and grocery stores to operate on a limited schedule.

It also hindered efforts to cope with a cholera outbreak that has killed dozens and sickened thousands. Clinics have warned they were running out of fuel and had difficulty accessing potable water. 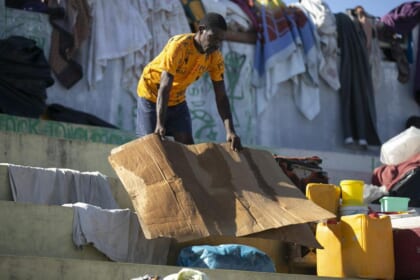 Gunfire echoed from the area around the terminal on Thursday as Haiti’s National Police fought to reassert control. Police Chief Frantz Elbé said in a voicemail shared with The Associated Press on Friday: “We won a fight, but it is not over.”

Official police social media accounts posted a video on Sunday with no sound stating officers were still “busy” at the terminal and saying “an important provision is taken to secure the perimeters.”

Cherizier stressed that neither the gang nor anyone working on its behalf has negotiated anything with the prime minister, despite claims by some politicians to have done so.

“This is a fight for a better life,” he said of the gang’s actions. “The situation has worsened. … We are not responsible for what happened to the country.”

Cherizier then asked whether Haitians are happy with their living conditions, whether they feel safe, whether their children can go to school without being kidnapped and whether they have food and medical care.

Many in the country of more than 11 million people are living in even deeper poverty at a time of double-digit inflation. Meanwhile, kidnappings and gang violence has increased following the July 2021 assassination of President Jovenel Moïse, forcing thousands of people to flee their homes. 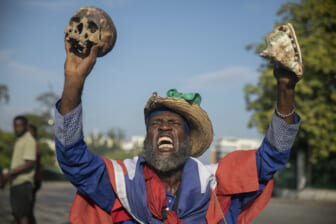 Also Read:
Haiti calls for help at the UN as world mulls assistance

Spokespeople for Haiti’s National Police and the office of the prime minister could not be immediately reached for comment following Cherizier’s announcement.

But some people on social media celebrated Cherizier’s announcement, referring to him as “Father” or “Mr. President.”

In early September, Henry announced his administration could no longer afford to subsidize petroleum, leading to sharp increases in prices that unleashed large protests.

On Oct. 7, almost a month after the blockade began, Henry requested the immediate deployment of foreign troops. The U.N. Security Council has yet to vote on the request, though it voted to impose sanctions on the gang leader himself.