Morris Day and The Time to be honored at Soul Train Awards; Ari Lennox, SiR among performers

The band will receive the Legend Award; Chanté Moore, Tank and Muni Long will also perform at the 2022 Soul Train Awards, premiering Nov. 27 on BET.

Morris Day and The Time will be receiving the Legend Award at the 2022 Soul Train Awards on Nov. 27.

BET announced the news on Monday, along with the list of the ceremony’s performers, including Ari Lennox and SiR.

Day and longtime The Time bandmates Jellybean Johnson, Monte Moir, Jesse Johnson, Jerome Benton, Jimmy Jam and Terry Lewis were among the architects of the Minneapolis sound, as contemporaries of and collaborators with Prince. Their talented lead singer — also a drummer, songwriter and actor — has fronted the hitmaking funk outfit since the early 1980s. Along with recent Rock and Roll Hall of Fame producing entrants Jam and Lewis, The Time accumulated hits like “Jungle Love,” “The Bird” and “Jerk Out.”

“They say the way you start is the way you finish, and being that I’m retiring end of next year, it’s only fitting that I return to the place that helped start it all,” said Day in a statement. “Our first major TV appearance was in 1981 on Soul Train with Don Cornelius. And 41 years later, to be honored with the Soul Train Awards Legend Award is what we call full circle. Truly amazing!”

Performing at the Soul Train Awards along with Lennox and SiR will be Chanté Moore, Tank and Muni Long. Coco Jones and Q are also set to leave impressions as part of the BET Amplified Stage. 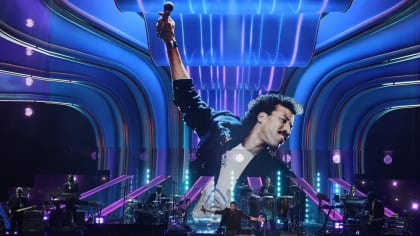 D-Nice will be presiding over the turntables for the annual Soul Cypher, where Long, Alex Vaughn, Durand Bernarr, and Tasha Cobbs Leonard will all lend their vocals.

The 2022 Soul Train Awards, hosted by comedian-actor Deon Cole, will premiere on BET and BET Her on Saturday, Nov. 27, at 8 pm EST.