"I wanted to make a change in my community and offer more options." — Lyana Blount on Black Rican Vegan.

Black Made is a new video series by theGrio that highlights Black entrepreneurs.

“Black Rican Vegan was actually a thought in 2016,” Blount tells theGrio. “I just never acted on it because I was working my full-time job and also doing my other business: Prepped To Go, which was like a meal prep business.”

During the pandemic, Blount shared her meals on her instagram feed and began to notice that people were showing interest in her dishes.

“The reason why it became so popular during the pandemic is because I had more time to be home and to showcase these dishes on my Instagram feed and people took a liking to it,” explains Blount.

“We started to gain a lot of followers over the time and people were home bored as well just watching me make these recipes and post these photos,” Blount continues. “And April 6, 2021, they wanted a menu, I created a menu for them and I was cooking all the food, making the deliveries the same day. And from there we haven’t stopped.” 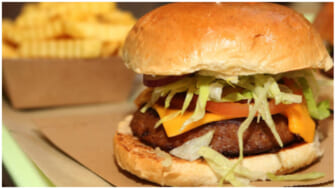 Blount went from cooking in her home to currently cooking at a commercial space in Harlem because of the high demand. She provides catering options and does pop-up shops throughout New York City!

Black Rican Vegan has received praise from stars like Grammy Award-winning artist Lizzo. On Tik-Tok, Lizzo uploaded a video of her trying several Black Rican Vegan meals. One was the Chopped Cheese Eggroll. After taking a bite, Lizzo exclaims, “I’m honestly speechless. This was the most delicious thing I ever had.”

Blount has a very small but mighty team and eventually hopes to open up a brick-and-mortar store in New York City.

“I’m just a person who just grew up cooking, doing what I love,” Blounts says. “You meet other passionate chefs who’ve been in culinary schools and have these big businesses doing what they have to do, too. And you’re almost sometimes compared. I think I just feel like I’m in my own lane and they know that they’re in their own lane.“

Check out the full video to learn more about Black Rican Vegan.