Celebrity favorite Chef Ameera teaches us how to elevate our holiday menus by preparing meals for the health of the mind, body, spirit and soul.

When you think of Hollywood chefs, you may think of high-end culinarians who prepare delights to match whatever a celebrity might be craving. However, Chef Ameera brings something fresh to the table, creating food that not only pleases taste buds but elevates the eater’s vibrations. She calls it “intentional cooking” — an enlightened approach that can heighten your own experience this holiday season.

Having cooked for big names like Diddy, Damson Idris, Daniel Kaluuya, and Angela Bassett, Chef Ameera initially became a personal chef in 2006 after being fired from a job. It was a spirit-led journey that not only prompted her to expand on her culinary skills and transition into a new career but to use ingredients as a means to infuse positive energy into the clients she served. Also known as “The Food Alchemist,” Chef Ameera’s spiritual approach to cooking uses the process of transfiguration in the food she creates to draw out its “light” and help elevate the body, mind, spirit and soul to higher highs.

Sound outlandish? Well, in layman’s terms, there are certain foods that target specific areas of our bodies — for instance, consider how ginger works great for tummy aches. In the West, however, most do not use food’s medicinal powers to our best advantage. That’s how Chef Ameera has been changing the game — by finding creative and delicious ways to highlight food’s natural attributes.

This holiday season, instead of just sticking to traditional dishes that often leave you feeling sluggish, Chef Ameera spoke with theGrio about ideal foods to integrate and which ones we should avoid if our goal is exalting our vibration. 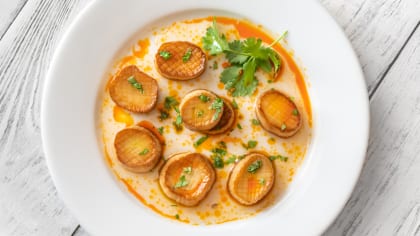 What does “The Food Alchemist” mean — and how did you get that name?

OK, so my name is Chef Ameera, and my title is “The Food Alchemist.” So really understanding food, the energy that is in food, and being able to alchemize that means to change. Alchemy is changing lead into gold. So it is the process of transfiguration and being able to take that light out of the food. It is all about understanding how to program food and using food as a tool, knowing exactly what foods are in tune with your body.

Tell me about your beginnings and how you became a Hollywood chef.

I’ve been cooking since I was eight years old and cooking complete meals by the time I was 10. I became a chef in 2006/2007 when I was fired from my job at Paramount. I went to film school and I would float around a lot as a [production assistant]. I loved it, although I was not as passionate about it as with food — and then one day, I got fired. I was like, “Damn, how am I going to pay my bills?” Within that day, I was like, “I’m going to be a chef. I know how to cook, I know how to entertain, I know how to serve people, and my clients will be celebrities, executives and athletes” — and that’s what I did.

It did not happen overnight. The vision came to me, and once I knew I was going to be a chef things happened. My dad had a restaurant. From a very young age, I knew I did not want a restaurant because I knew the stress that went into it. Later on, I found out about being a personal chef and didn’t realize my dad was a personal chef to Muhammad Ali and a few people. He would personally cook for them, but it still had not clicked until it did.

Is “spiritual cooking” a term for you? And what does that mean?

There is spiritual cooking, and we can use it as intentional cooking. Intentionality means being very present on exactly what you’re doing, where you’re going, and each ingredient that you’re putting in. Even understanding how herbs and these ingredients from nature that haven’t been denatured by man, haven’t been processed…were put there with a specific intention and specific energy to do something within the body.

What does Thanksgiving mean to you? What does the holiday season represent for you as a chef?

First and foremost, for a chef, it is one of the busiest times, and I love seeing families come together…I lead with love and focus on love and joy. Coming together as a family and community are so important, and we don’t have that right now…Leading with love, however, and creating a different meaning for the holiday, whatever works for you and your family is good.

Which foods should we stay away from this holiday season? Which should we incorporate?

We should stay away from sugars because sugar is one molecule away from crack or cocaine. That is how powerful sugar is. I love sweet things and there are alternatives: things that are healthier for the body that [do] not cause you to crash or to have depression and anxiety. The alternatives are honey, agave, date sugar, coconut sugar, and even yacon syrup. Stay away from sugar, processed sugar, and super ultra-refined processed food like corn syrups.

Some foods we should incorporate are more vegetables. Collard greens and kale are really good. Incorporate some roasted veggies and not so much meat this holiday season.

We need to also start using more spices in our foods that help out the digestive system and help warm up the body like cinnamons, and gingers.

I know it’s the holidays but be more mindful when you’re eating. Start with the things that are going to break down faster like your fruits or your vegetables. Eat that first and then go to the heavier items because if you eat the heavier items first imagine the traffic. Imagine a big truck being on a small highway, and everybody’s behind this big truck, when we could have put the small cars in front and traffic would move faster. So look at it like that and pay attention to the order.

What’s the first step in intentionally or consciously cooking for the spiritual body?

I would say the first step [would be] to reflect on self. You should first have a meditative practice or a practice where you can check in to see what you need because if I’m consciously and intentionally cooking, then I’m listening to what my body needs…Whether it’s a morning journaling practice — or it could be a breathing practice because once you sit down and you center yourself, you get that monkey mind out of the way. Because it’s not about silencing; it’s about actually listening to it. When you listen, it sounds like a child that keeps saying “Ma, Ma, Ma” and you’re like, “OK, how can I help you?” And then when you listen to them, they stop talking.

So it’s not about silencing those things, it’s about listening to this chatter. As you start to listen and give it attention, it will start to disappear and you’ll get to that voice that will say, “OK, so you know, what’s going on in your body right now?”…You just have to take the time to sit down. If we are not clear, ask the question; ask your body what it is that you need right now, and be there to listen. From there, we’re going to be intentional about our ingredients. 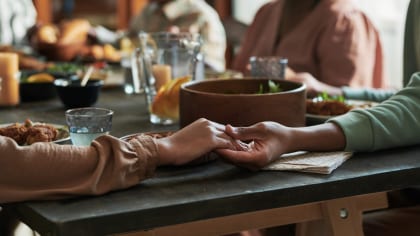 Also Read:
6 things to do on Thanksgiving Day besides eat

How do we elevate our vibration with food? What are some of your techniques?

There’s one way and that’s choosing to eat not just organic, but paying attention to where our food is sourced from. If you can get to the farmers’ market, the food is gonna taste completely different because it’s grown by a farmer. Stuff in the grocery store is sitting in a warehouse with gas that helps it. It’s usually picked before it’s even ripe. That’s why a lot of times it doesn’t taste right or it tastes different because it’s not even naturally grown so there’s going to be a disconnect somewhere. Be intentional about where you get your food from.

And then have energy that you bring into the kitchen…If you’re upset, do not cook. If you’re feeling sad, do not cook — or maybe cook a dish that can allow you to release it. The energy you should be bringing into your food is joy. Put on a song that is gonna make [you] feel joyful.

What would you tell young Black chefs pursuing a career similar to yours?

When my career took off, I manifested it and lost it just as fast because it was not grounded or rooted in anything. So when I rooted myself in my spiritual practices — and maybe that’s going to church for somebody but whatever it is, when I did those things, when I made sure that I had peace of mind; when I made sure that I was doing my internal work, everything within my life would manifest. So I would focus on your internal self. Your development practices or your spiritual practices have to be No. 1.

Decide exactly what type of clientele you want because celebrities and executives are different skill sets. Niche yourself down and that will help catapult your success. Get some systems in place, invest in yourself, and get yourself a coach. If these things are not in order, it doesn’t matter how much success you get, you will have to come back to it because if you didn’t fix that foundational element then you’re going to be right back at square one.