On Thanksgiving, if your family says crazy things, argue back! 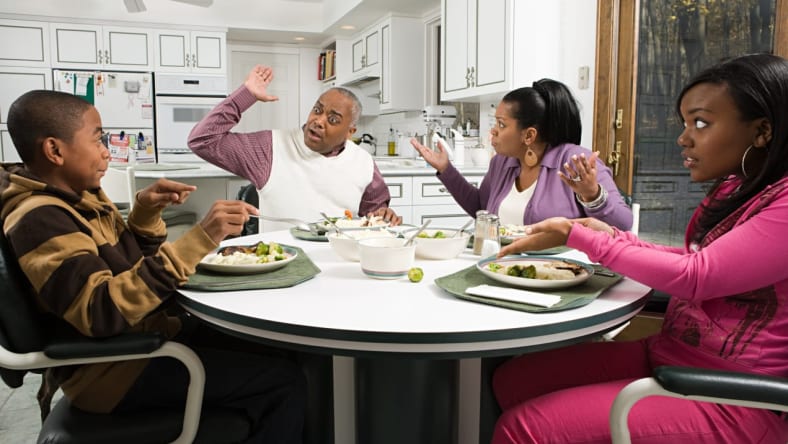 Thanksgiving is a time when we get together with people who are related to us, but some of them may look at the world so differently that we might question whether or not we’re really related. And there’s wine or maybe whiskey swirling about, and there are so many things to argue about — Biden, Trump, abortion, Kyrie, Kanye, your life choices, what was really in the COVID-19 vaccine, why are there so many trans people in the world nowadays, who’s really to blame for mass shootings — if you have relatives who watch Fox News or no news or subscribe to conspiracy theories, then Thanksgiving dinner just might be the time when you’re on the verge of a verbal nuclear war. I know that some people say don’t talk politics at the dinner table. I know that some of us want to keep the peace. I say hogwash. Why should you hold your tongue? You’re the one who’s right. This Thanksgiving, it’s time to let them know how you really feel.

See, when I don’t say how I really feel, I feel diminished. I feel silenced. And it bothers me. Later on, I question myself: “Why didn’t you speak up? Why didn’t you say what you know to be true?” And I can’t live like that. You shouldn’t live like that either. This ain’t about freedom of speech and the Constitution. It’s about a moral right to express yourself and speak the truth. I mean, if you refuse to hold your tongue when white folks say dumb things, why should the Black people in your family get a pass? Nah. If they don’t start none, there won’t be none, but if Uncle Chauncey runs his mouth about how Kanye did nothing wrong or Aunt Jackie prattles on about why abortion shouldn’t be legal, why do I have to sit there and just listen? Later for that. I’m bringing the heat. You didn’t invite half of me to Thanksgiving. You invited the whole me, so I’m going to give you the whole me. If someone wants to talk about politics, let’s go. I don’t care how many times Mom kicks me under the table, I’m not gonna be silent. We gonna fight. I would advise you to do the same. 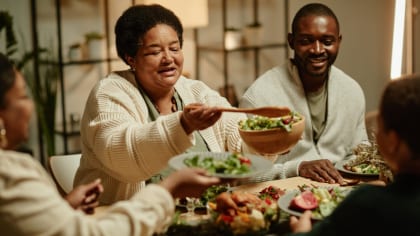 Also Read:
How to handle Thanksgiving after a death in the family

There are, of course, some rules to all this. Don’t curse, don’t get belligerent, don’t make it personal, don’t get angry — maintain a sense of decorum. Stick to ideas rather than telling them about themselves. When things get personal, then you know you’ve gone off the rails. But don’t shy away from the conversation. These sorts of intense, intergenerational, intellectual arguments can be valuable. They help you understand the other side a bit, and they can bond with you. Maybe. More important is that you don’t hold your tongue because doing that is corrosive to your soul.

I remember one Thanksgiving about seven years ago, during the time when Trump was rising in the race for the presidential nomination. My uncle came with his husband, and everything was lovely until someone mentioned Trump in a derisive tone. As soon as the anti-Trump words were out of that person’s mouth, my mother yelled, “No!” because she could see the train wreck that was about to happen. She knew where my gay Black uncle stood on Trump. None of the rest of us knew until my uncle said something like, “I like Trump.” The room paused. What did he just say? If it was a movie, you would’ve heard the cacophony of dinner screech to a halt except for the dropping of a plate and the subsequent shattering. Everyone leaned back and clutched their pearls, afraid to say anything that would risk ruining the mood. But, my friends, that’s the sort of moment where I rush in. The truth was in trouble, and I had to save it. I unsheathed my verbal sword and went to battle.

I told my uncle exactly what was wrong with Trump, both the man and the candidate. I was passionate but respectful. My uncle retorted with something dumb. Something about how he didn’t want immigrants taking over the border. But, um, you live in Massachusetts. He said police officers used to know everyone on the block, and if you were bad they’d take you in an alley and whack you around a little and straighten you out. I said, “So, you’re arguing in favor of police brutality?” He angered me, but I kept it cool as I sliced and diced his arguments. I made my retorts a little funny whenever I could to keep things from getting contentious, but I didn’t hold back. I was able to say my piece and not sour the mood. It can be done — we can fight for the truth without killing the vibe.

This year, I’m sure someone at my Thanksgiving table will say, “But Jews really do run the media,” or “Back in my day, girls didn’t get abortions because they didn’t sleep with every guy who winked at them” or “I think we can all agree that vaccine really was some BS after all” or “The reason why all these rappers are getting killed is hip-hop culture.” You may hear one or all of those comments at your celebration. Trust, I won’t back down. Neither should you. Destroy their silliness with intelligence, evidence, facts and precision. Keep it cool and classy but don’t let them just say any old crazy anti-factual thing just because y’all are related. Not while you’re in the house.