PORT-AU-PRINCE, Haiti (AP) — The director of Haiti’s National Police Academy was shot and killed at the doors of a police training facility in a gang-controlled neighborhood in the country’s capital of Port-au-Prince, Haitian police said Friday night.

The killing of Harington Rigaud is just the latest in a number of attacks against law enforcement, including the killings of police officers and attacks on official buildings. It also comes as Haitian and international authorities grapple with how to control rampant gang violence in the Caribbean nation.

Video circulating on social media Friday shows Rigaud’s bloody dead body stretched out on the ground. Later in the evening, police spokesman Garry Desrosiers confirmed the killing, writing Rigaud was shot inside an official police vehicle as he was about to enter the police academy. 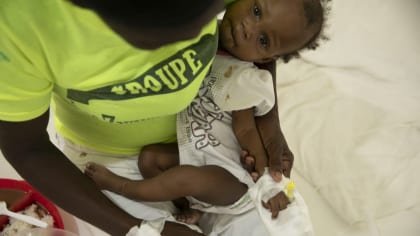 Desrosiers was unable to confirm immediately who killed him, not out of the norm in Port-au-Prince, where gangs are estimated to control 60% of the city.

The country’s crisis was deepened following the 2021 assassination of Haitian President Jovenel Moïse, which thrust the country into chaos.

It’s just the latest example of how difficult it may be for authorities to reign in violence despite the recent lifting of a gang blockade on fuel supplies, which paralyzed Haiti for weeks.

At the same time, the nation has also struggled with a cholera outbreak, malnutrition and a resulting migratory exodus.