In part one of a wide-ranging interview, Moore chats with theGrio's April Ryan about his upcoming swearing-in ceremony and what he has planned as Maryland's first Black governor.

Days before his inauguration, in a downtown office building in Baltimore City, Maryland Governor Wes Moore sat down with theGrio for a wide-ranging interview that touched on the challenges ahead and how the 44-year-old rising political star plans to unite a state that is a microcosm of the political dynamics seen across the nation.

On Wednesday, Moore will be sworn in as Maryland’s first Black governor, and only the third Black governor elected to office in U.S. history. As he prepares to step into his historical role, the Baltimore native, who is of Jamaican ancestry, reflected on his family lineage of those who have worked in service to others. That history is why Moore says he’s proud of the coalition he was able to build with his historic campaign that extended beyond Black and Democratic voters to win this past November, something Moore says is “inspiring.” 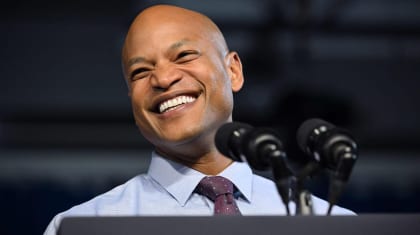 Moore believes Marylanders are ready for change as they have faced uncertainty in the “lack of an understanding about what these next days and months and years are going to bring.” He explained, “It just feels like, for a lot of people, the only stability is instability that they continue to feel.”

The election of Moore on Nov. 8, 2022, was a bright spot for Democrats, as many historic Black candidates running for statewide office were defeated in the general election. His victory also reflected what is possible for Democrats in competitive contests against Republicans.

Newly elected Democratic House minority leader, U.S. Rep. Hakeem Jeffries, told theGrio, “Wes Moore is a phenomenal leader, patriot and American, and his election is another narrative on our journey toward a more perfect union, which symbolizes the progress that has been made in America.”

As a United States Army veteran, Moore makes it clear that he is a proud patriot. During the campaign, Moore pushed back against the perception that Republicans, particularly MAGA Republicans, are more patriotic than those on the political left.

“It becomes incredibly important that we do not allow an individual or a party to bastardize this term,” said Moore, who wore a pair of yellow, black and red socks depicting the Maryland state flag. “My definition of patriotism was when I left my family, and I deployed to Afghanistan with the 82nd Airborne Division and risked my life for this country,” he explained.

Seemingly referring to the Donald Trump-dominated wing of the Republican Party that instigated and, in some cases, defended the Jan. 6 insurrection of the U.S. Capitol building in Washington, D.C., Moore said emphatically: “Patriotism is not working to destroy democracy.” 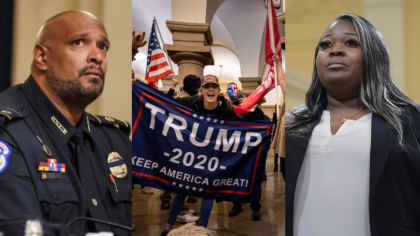 As the growing pains on matters of politics and race in America become more evident, Minority Leader Jeffries said, “We still have a way to go, but we can be confident that America is on a positive, hopeful trajectory when we see the emergence of leaders like Wes Moore.”

Moore said he plans to lead the state by focusing on economics and creating “pathways” for more jobs and higher wages. The economy is a concern nationally and throughout Maryland, and is a particular concern in the predominantly-Black city of Baltimore, which is the largest in the state. Moore says he wants to change Maryland’s current status of being “asset rich” and “strategy poor.”

“Maryland is going to close the racial wealth gap … because the truth is Maryland has an 8-to-1 racial wealth gap,” said the former CEO of the anti-poverty organization Robin Hood Foundation. “If you truly want to have sustainable economic mobility, you’ve got to make sure that the sustainable economic mobility is shared,” said Moore. “If you have a consistent and a permanent underclass, you’re never going to be able to have the kind of economic growth that you’re hoping for if you want to help yourself [and] help others.”

The governor said he also wants to improve the lives of residents in Baltimore, which has experienced a spike in crime with some of the largest homicide rates in the nation and a fraught economy. He wants to also highlight the good that already exists within Charm City.

“[Baltimore] has two of the top HBCUs in America. We’ve got the Port of Baltimore, one of the most productive ports. We’ve got Johns Hopkins University and other amazing institutions [and] two-year colleges,” noted Moore. But it is the people, he said, who are “the most remarkable asset” in Baltimore. He added, “It’s also really important that the state understands that you cannot have a thriving Maryland if you do not have a thriving Baltimore.”

Moore’s hyperfocus on Baltimore is strategic and part of a trend in urban cities across the country.

“I’m good at math … if you look at what’s happened over in Detroit over the past 12 years, Detroit’s growth has been one of the key reasons that you had Michigan growth,” said the governor. “If you look at Atlanta over the past 30 years … [it] went from being a small commuter town to now rivaling Hollywood in terms of film productions … [and] the main beneficiary of that has been Georgia.”

When Moore is sworn in on Wednesday afternoon, he will have a piece of home and family with him as he takes his oath of office on the bible of his grandfather, Rev. Dr. James Thomas, who was the first Black minister in the history of the Dutch Reformed Church.

“I love this Bible, and I’m so proud that this is a Bible that I not only use, but I’ll get sworn in on this Bible,” he said. “It allows me to maintain a level of closeness to someone who was one of my heroes.”

Watch part one of theGrio’s sit-down interview with Maryland Governor Wes Moore above, and stay tuned for more of Moore’s interview on Wednesday, Jan. 17.