The Grammy-winning rapper said "it was terrible" when she and her husband got the news of Takeoff's Nov. 1 death.

Cardi B recently recounted when she and her husband, Offset, found out about Takeoff’s death. A shooting claimed the life of the youngest Migos member last year.

During an interview on “The Jason Lee Podcast,” Cardi B detailed her and Offset’s reaction to hearing about the death of the 28-year-old rapper. Takeoff was fatally shot on Nov. 1, 2022, in Houston outside of a local bowling alley. Stray bullets struck the rapper following an argument after a party he attended with fellow Migos member Quavo.

The Grammy Award-winning rapper told Lee where she and Offset were when they received the news. “We was in bed. I was supposed to go to La La [Anthony]’s party in New York,” Cardi said referring to a Halloween party she was scheduled to attend, but stayed home when their daughter vomited on her costume.

“Out of nowhere, Offset’s phone kept ringing, my phone kept ringing. Offset picked up the phone and he was just like ‘No!’ He’s screaming ‘No, no, no, no!’ I’m like, ‘What’s going on?’ and he’s like, ‘Takeoff is dead.'”

Cardi said she couldn’t believe it at first. “I smacked him and I said, ‘Don’t say that. Like, don’t say that!’ And then he [was] just screaming and just throwing things, throwing up, running all over and I was so scared. I was just crying so much. It was terrible.”

Weeks after Takeoff’s death, Cardi took to social media and expressed in a since-deleted voice note the grief that Offset was experiencing, according to People. 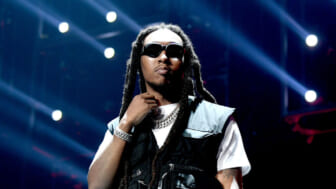 “I have been feeling so hopeless trying to make my husband happy,” Cardi said. “Trying to make him crack a smile, seeing him randomly cry, see him trying to distract his mind completely, schedules been changing, trying to keep up with work after everything that he’s been going through these past couple of weeks.”

Quavo released a tribute song to Takeoff, who was also his nephew, on Jan. 4 called “Without You.” The two released a duo album, “Only Built for Infinity Links” on Oct. 7, less than a month before Takeoff’s death. The Migos’ last album was 2021’s “Culture III.”