Lil’ Kim, Ashanti to perform at Apollo Theater as part of Harlem Festival of Culture kickoff

"The Jump Off with Lil' Kim and Friends" will also feature appearances by Remy Ma and Fivio Foreign.

Lil’ Kim is scheduled to perform at New York City’s Apollo Theater on Jan. 26 in one of the Harlem Festival of Culture’s (HFC) opening events. Ashanti will be joining the Queens rapper at the world-famous Harlem venue.

“The Jump Off with Lil’ Kim and Friends” is the year’s first live HFC event. The festival is a present-day reboot of the groundbreaking Harlem Cultural Festival of 1969. Remy Ma and chart-topping Brooklyn rapper Fivio Foreign are also scheduled to perform during what will be Lil’ Kim’s debut as an Apollo headliner.

“It’s going to be a night to remember to help kick off the Harlem Festival of Culture’s road to the Festival with some of my special friends” said Lil’ Kim in a statement. “Apollo was like my backyard and I played there so much and every time it was always love. The crowd is always amazing!”

The concert, which coincides with the Apollo’s 89th anniversary, also marks the beginning of HFC’s partnership with the Apollo. The famed theater will be the venue for some of the events when the festival begins in earnest in July at Harlem’s Marcus Garvey Park.

“We are thrilled to be in support of the Harlem Festival of Culture, this is a moment that will not only celebrate our Culture but provide a time to engage our beloved Harlem Community and all that it has provided to Global Culture,” said Kamilah Forbes, Executive Producer of The Apollo.

The festival is a reimagining of the Harlem Cultural Festival of 1969 that was featured in Questlove’s Academy Award-winning documentary, “Summer of Soul.” Yvonne McNair, HFC Co-Founder and Technical & Talent Producer, acknowledged that Thursday’s concert is not only important for the festival but also a celebration of hip-hop. 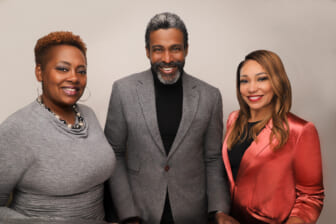 “As we prepared to start on this road to the launch of the Festival, we realized that this was also a milestone year for hip hop and knew that our first major event out of the gate had to be special and center around hip hop and R&B,” McNair said in a statement.

Continued McNair, “Hip hop culture has touched every single part of society and there is no artist that better represents its far-reaching impact than Lil’ Kim. We are so thrilled that Kim will help us to curate the evening to bring a full one-of-kind music experience to audiences in the city where it all began.”

Additional special guests of “The Jump Off” will be announced as the concert date approaches.