LAPD officers are accused of using unreasonable deadly force, other claims over the death of Keenan Anderson

LOS ANGELES (AP) — Lawyers for the 5-year-old son of a man who died after repeatedly being shocked by Los Angeles police with a stun gun following a traffic collision filed a $50 million claim Friday for damages against the city.

The legal claim is required before Keenan Anderson’s son and estate can sue LA police for wrongful death and civil rights violations for restraining him and shocking him six times with a Taser in less than a minute on Jan. 3.

“If you Taser someone with 50,000 watts of electrical energy six times … is there really any wonder that moments later his heart will begin to flutter?” attorney Carl Douglas said at a news conference. “Is there any wonder why four hours later his heart could no longer withstand the pressure from that Taser and gave up, leaving a 5-year-old boy in his wake?”

The claim was filed on behalf of Anderson’s son, Syncere Kai Anderson, who stood with his mother, Gabrielle Hansell, the administrator of his estate, alongside their attorneys. 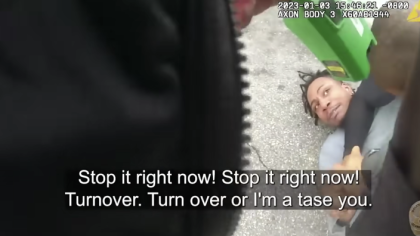 Anderson, 31, a high school English teacher in Washington, D.C., and cousin of Patrisse Cullors, co-founder of Black Lives Matter, was the suspect in a hit-and-run traffic collision when he was stopped by police in Venice. He later ran from officers and resisted arrest, police said.

Anderson screamed for help after he was pinned to the street by officers and repeatedly shocked, according to video released by the department.

Footage showed an officer pressing his forearm on Anderson’s chest and an elbow in this neck.

“They’re trying to George Floyd me,” Anderson said in reference to the Black man killed by officers in Minnesota.

“We can only wonder what Keenan Anderson meant,” attorney Ben Crump said. “But if he meant that he would end up dead at the end of the encounter at the hands of the Los Angeles Police Department then Keenan Anderson was correct. They George Floyd him.”

Chief Michel Moore said Anderson initially complied with officers as they investigated whether he was under the influence of drugs or alcohol. But he was subdued after struggling with officers who had chased him when he bolted.

Anderson ran in fear — as other Black men have — when additional officers responding to a call for backup rushed toward him, Douglas said.

The claim said officers used unreasonable deadly force, carelessly and mistakenly deployed the Taser, failed to follow training on the dangers of asphyxiation while handcuffing Anderson and conspired with each other to hide and distort information in false police reports. 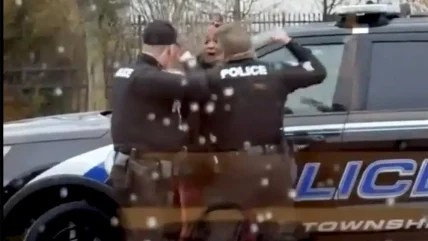 An LAPD toxicology test found cocaine and cannabis in Anderson’s body, the chief said. The coroner’s office will also perform a toxicology report.

The officers haven’t been named yet but their union issued a statement saying the family and attorneys were “trying to shamelessly profit” from a “tragic incident.”

After being subdued, Anderson went into cardiac arrest and died at a hospital about four hours later.