Both documentaries premiered at Sundance this week, offering refreshing, powerful and engrossing looks at a vastly underrepresented group of people.

The Sundance Film Festival is underway, returning to in-person events in Park City, Utah, for the first time since 2020 with an impressive slate of independent films set to make a splash in the coming year.

While theGrio has been in attendance and screened some of the biggest projects, we have observed so far that some of the most impressive, urgent and powerful stories have come from two immersive documentaries centering around the Black trans experience and sex work: “Kokomo City” and “The Stroll.” The films utilize different approaches and cover different ground but are similar in that they take viewers into the true lives of real people from marginalized groups who have for far too long not told their own stories.

“Kokomo City,” the directorial debut of two-time Grammy-nominated producer, singer and songwriter D. Smith, is, to put it simply, unforgettable. Shot in gorgeous black and white, this spectacular documentary follows the lives of four Black trans sex workers in New York City and Atlanta. Daniella Carter, Koko Da Doll, Liyah Mitchell and Dominique Silver each take the audience on a captivating, thrilling and often-hilarious journey. Speaking directly to the camera, the women detail their own lives, their relationship to the various aspects of their profession and more.

Full of searing humanity, nuance and care for the women in front of the camera, D. Smith’s project is by far a stand-out. The film not only investigates the stigmas surrounding sex work, but also around the cisgender male clients and partners who openly and proudly love trans women, a perspective too often missing from trans representation onscreen.

TheGrio attended Outfest’s “Outfest Outpost” on Saturday. The event gathered filmmakers, press and creatives in the LGBGQIA+ community to celebrate how far the community has come in TV and film, lift up the queer stories currently in the festival and to discuss how the fight continues for representation in the media. During one panel, Smith reflected on “Kokomo City” and how her own learned-perceptions around sex work were challenged.

“Even though my intentions were to help the girls and to capture them, I had this perception that I was out to save them or help them, but they taught me so much. The amount of humility and dignity that these girls possess … it literally changed my life and in so many ways, it healed me.” 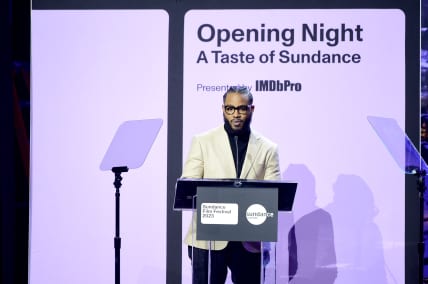 While “Kokomo City” homes in on trans lives today (circa 2020s), Kristen Lovell and Zackary Drucker’s “The Stroll” provides a necessary and vibrant history lesson about “the stroll.” It was an area in New York City where from the late 1970s to early 2000s transgender female sex workers congregated. In what is now the transformed (and gentrified) Meatpacking District, these often young and homeless transgender women of color found work, community and sisterhood in a world that relentlessly tried to push them out.

Lovell not only directs “The Stroll,” but tells her own story, detailing her move to New York City, how transitioning cost her jobs when no one would hire trans people and how she began sex working on “the stroll” to survive. The film invites viewers into conversations between Lovell and her sisters, friends and peers with whom she formed formidable decades-long bonds, while never losing focus on the women who finally get to share their true experiences and to reminisce about their youth and the highs and lows along the way.

“It was important for me to interview them and make them feel comfortable like we were having an everyday conversation,” Lovell said on the GLAAD panel, “From “The Stroll” to Sundance: How One Documentary Came to Be and a Path to Reclaiming Transgender Narratives.” Speaking to the sisterhood, she explained, “There were different groups of girls on ‘the stroll’ and I tried to reflect that in the film. Not all of us were the best of friends but we were all still a part of that community and we acknowledged each other’s existence.”

She continued, “We were just trying to figure out life, you know? We were thrown out of our homes and didn’t know what to do … and we grow up, and grow older and separate but we have this shared experience and it’s so important because people will never understand the beauty of that camaraderie.”

Through the elevated and fascinating viewing experiences of these two films, one can’t help but feel not only the power of representation, but of authentic representation. Members of the LGBTQIA+ community — specifically trans people and trans women of color — have been around for a very long time but have been shut out of telling their own stories.

“Kokomo City” and “The Stroll” offer that to their audiences, providing a little dose of history, searing truth and plenty of laughs and joy.