War on drugs locked him up; now he’s a weed entrepreneur

The shop in Manhattan's Greenwich Village, called “Smacked," opened to the public Tuesday with the state's support.

NEW YORK (AP) — When the war on marijuana came sweeping through his New York City housing project decades ago, Roland Conner found himself going in and out of jail. It’s a time he’d rather not talk about.

Now, at age 50, he has opened the state’s first legal cannabis dispensary to be run by someone previously punished under New York’s old, prohibitionist drug laws.

The shop in Manhattan’s Greenwich Village, called “Smacked,” opened to the public Tuesday with the state’s support. It is New York’s second legal place to buy recreational marijuana, but the first to benefit from a program that set aside dispensary licenses for people with pot-related criminal convictions.

Conner is also receiving support from a $200 million public-private fund to aid “social equity” applicants for the state’s tightly controlled supply of dispensary licenses. The money is intended to help redress the ravages of the war on drugs, especially in communities of color.

“When people come together passionately to fix something, they can actually make things happen. And I’m a living example of that now,” said Conner as he prepared for the store’s opening.

New York legalized the recreational use of marijuana in March 2021 but the state-sanctioned marketplace for the drug has had a slow roll-out. The first 36 licenses were awarded in November. State officials have reserved 150 dispensary licenses in the initial wave of applicants for people with past convictions for marijuana offenses. 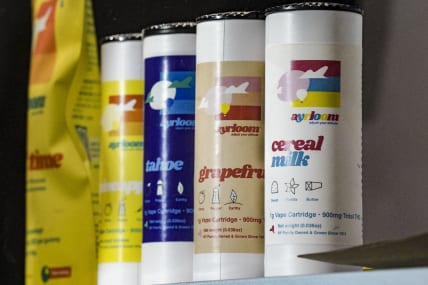 Gov. Kathy Hochul, a Democrat, hopes Conner’s venture will serve as a model for other would-be entrepreneurs.

“This dispensary is the latest example of our efforts to build the most equitable and inclusive cannabis industry in the nation,” Hochul said in a statement last week. “As we continue to work toward righting wrongs of the past, I look forward to new dispensaries — owned by those most impacted by the over policing of cannabis prohibition — opening soon.”

Like many others, Conner was locked up for relatively minor offenses in his youth. A conviction in 1991 sent him away for months. Talking about it now, he said, only brings back trauma.

For the past 15 years, he has operated a property management business and he is currently managing a transitional housing facility in the Bronx. That’s given him the business experience required to qualify for a dispensary license.

Smacked is opening as a pop-up dispensary while work is being completed at the storefront. His wife, Patricia, and his son, Darius, will be operating the store with him.

They will have to compete with the scores of illicit dispensaries in New York that have long been in operation. When he opened his store, Conner was mindful that another unlicensed shop would soon be opening nearby.

Conner recalls his younger days, when marijuana was part of daily life. He grew up in the projects, in a poverty-stricken area of New York called the Far Rockaways, where some young men whiled away time getting high.

“We were basically poor. Like any other New York City housing project, it was just riddled with poverty and drugs,” he said. “We went hungry a lot, but my mother did her best to make sure that we were always fed.”

“Back in 1991, that’s when I started getting locked up for cannabis and just getting sucked into the streets at that point. It was so long ago,” he said. 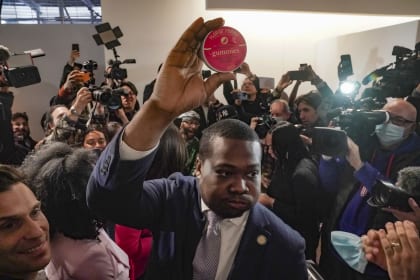 “When I saw my son going down this path,” he said, “I didn’t want him to start going down that particular road and jam himself up.”

With the state opening up a legal marketplace, Conner and his family decided to take a chance and apply for a dispensary license.

“I had to step back and just listen to my dad and figure out a way,” said his son, Darius.

“He said there’s a legal way to go about doing what I’m doing now,” Darius Conner said. “At the end of the day, I really want to go into the right way of doing it.”

Officials said Conner received support from the Bronx Cannabis Hub, which was founded by the Bronx Defenders and the Bronx Community Foundation to support individuals applying for the first round of licenses.

Federal data shows similar percentages of white and Black people use marijuana, but the arrest rate for Black people is much higher, according to reports by the American Civil Liberties Union and others.

“When people are in poverty, they do certain things that they wouldn’t normally do,” Conner said. “And so if you don’t speak to poverty and you only speak to harsh law enforcement without speaking to the reason why people do the things that they do — it’s problematic.”