Can black youth repeat their strong voter turnout from 2008? 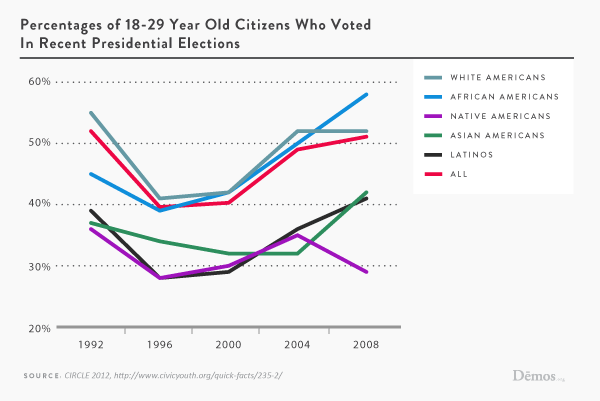 As the chart above shows, a remarkable and hopeful trend within the youth vote is the rise of the black youth vote. In 2008, a greater share (63.9 percent) of black citizens under 30 overcame the unnecessary hurdles of registration than any other youth demographic, and a record 58 percent voted – the highest youth turnout rate in history. Even in the low-turnout midterm elections of 2010, African American youth led their white, Asian and Latino peers to the polls.

This tale of progress is not irreversible, however. Imposing strict photo identification requirements could, according to a new report from the Black Youth Project, lead to the demobilization of anywhere from 9 to 25 percent of young voters of color in this election. That distortion of our democracy is a high price to pay to prevent the lightning strike that is in-person voter fraud. At best, it’s a cynical move by elected politicians to keep citizens from voting them out. At worst, it’s a desperate reaction to the demographic evolution that threatens to make a party without multiracial appeal into an historical artifact.

The good news is that we can fix this. Passing laws that expand the freedom to vote truly do work: states with same-day registration, a central Demos policy proposal, had young adult turnout in 2008 a full nine percentage points higher than states without the reform. As my colleagues have catalogued this week, nationwide same-day registration could diminish the need for a National Voter Registration Day weeks before the campaign.

For now, however, coordinated action that invites young people to register themselves and their friends is essential. Many youth groups were official partners of National Voter Registration Day this week, including one, the Andrew Goodman Foundation, with a special history.

During the Freedom Summer of 1964, three activists in their early 20s – two Jewish, one black – traveled through Mississippi to register black Americans to vote. The three, Michael Schwerner, James Chaney and Andrew Goodman, were murdered on a country road by a Ku Klux Klan mob. They gave their lives for the freedom to vote – and for the American dream of political equality and inclusion that this freedom helps keeps alive.