Tamar Braxton spends New Year’s with Vince, defends him against claims of abuse

Tamar Braxton and Vincent Herbert sparked reconciliation rumors when they were seen out and about together on New Year’s Eve, and after Braxton defended Herbert against accusations of abuse.

Herbert was reportedly backstage with Braxton during her Great Xscape Tour. This despite the fact that only days earlier, Braxton had claimed on social media that Herbert got another woman pregnant.

–Tamar lashes out: Did Vince Herbert get Laura Govan pregnant?–

However, despite the bad times, Braxton has recently stuck by Herbert against accusations of abuse.

Melissa Schuman claimed that Herbert gave her PTSD due to years of being abused “verbally and emotionally” while she was in the R&B group Dream. 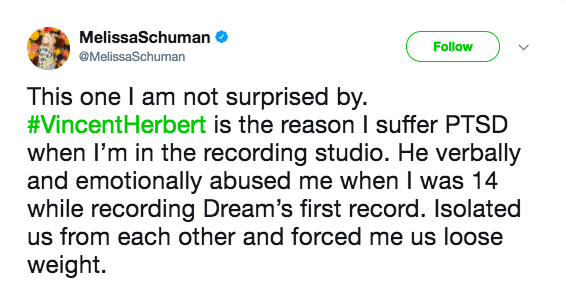 “#VincentHerbert is the reason I suffer PTSD when I’m in the recording studio. He verbally and emotionally abused me when I was 14 while recording Dream’s first record,” Schuman wrote on Twitter. “Isolated us from each other and forced me us loose weight [sic].”

“When Holly was recording, he’d have us do laps around the recording studio in the heat of the summer,” she added.

“The industry THEN was like bootcamp for ALL of us,” she wrote on Twitter. “Don’t even try to use out [sic] personal Family situation for attention!!”

She later added, “Don’t try me Becky cause right now you are doing the MOST! He’s not a woman beater, abuser or a BAD man! He just made Bad choices like we ALL do… to ME NOT YOU!! So miss me on the thirst bucket train.”

#ClapbackSeason: Chileee #TamarBraxton clapped back at #MelissaSchuman’s claims about #Vince and said she suffers from #INAC (I need a check) ?? (view previous post)

Schuman then released a statement in response, saying, “I do not apologize for speaking up for myself regarding what I endured by Vincent Herbert during the creation of our first record album. I was not attempting to insert myself into their reported family life but highlight and re-emphasize a problem in the music industry that I had previously documented on my blog. This is about all forms of abuse.”

“Using the guise of ‘Artist Development’ to support the use of mental and emotional abuse is dangerous…. It is never permissible or acceptable to verbally assault a child or adult for that matter.”