EXCLUSIVE: Jas Boothe on problems plaguing female vets, ‘Take a Knee’, and how you can help 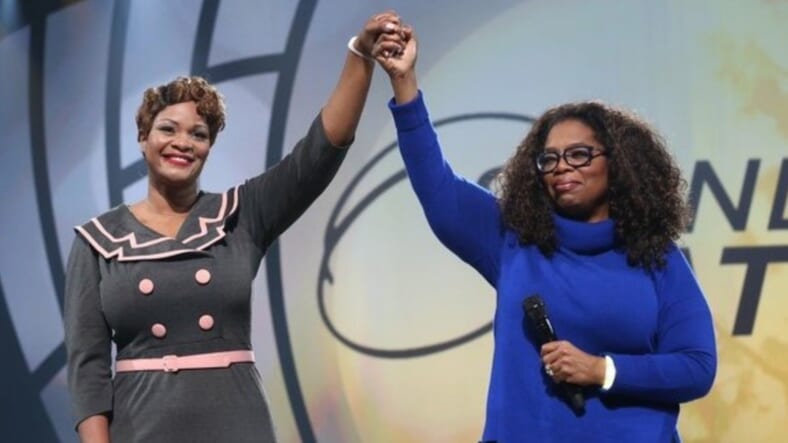 MAJ Jaspen Boothe is the definition of a hero.

The Chicago-native is a mother, wife, cancer survivor and veteran who served this country for 17 years, but her fight is far from over.

Her work is highlighted in the recently released documentary, Served Like a Girl, which follows Jas and several other female veterans as they prepare for the 2015 Ms. Veteran America competition. The eye-opening film sheds light on the many problems facing female veterans on and off the battlefield and shows the strength and resilience of the women who bravely serve in the military.

“I connected with Served Like a Girl in a way I didn’t think I would have. Sometimes we are portrayed as damsels in distress and birds with broken wings and I was initially reluctant to participate in the film because I thought that’s what this would look like. I was completely blown away and proud of how it came out and how we were portrayed,” she told TheGrio during an exclusive interview.

“Male veterans are always portrayed as strong war fighters who are on the front line. Even if a guy worked in supply and had never seen combat he still is seen as a war fighter. When it comes to women, we’re not seeing as being on the front line and standing toe to toe with our brothers and being in harm’s way, but we are. There’s always an assumption of what we have done and what we have contributed. She was able to show the true magnitude of what it means to be a woman and raise your right hand.”

In 2005, Jas was in the Army Reserves and living as a single mother in New Orleans. She was gearing up for deployment to Afghanistan when Hurricane Katrina hit, ravaging everything she owned. The next month, she was diagnosed with aggressive cancer in her head, neck, and throat, forcing her to seek life-saving treatment instead of heading to the battlefield.

“When I sought out resources for help, they looked at me like they had never seen a woman who had served in their life. They told me that since I had an illegitimate child, I should go to the welfare office and get food stamps,” she recounts.

While many assume there are numerous services and resources for all veterans, that’s not entirely accurate.

“Co-ed housing is the wrong freaking answer. Look at the GAO report that was done. They had women and children being housed with registered sex offenders. You want to put me and my child in a facility with guys I have never met? I don’t know their backgrounds or what they’re capable of. That’s the wrong answer.”

“I think there is still a long way to go. My organization, Final Salute, is still the only transitional housing in the DC metro area that houses homeless female vets and their children. There are only a handful that I’m aware of and many are underfunded. Some are constantly opening and closing because they don’t have the resources they need,” she explains. “When you say you’re serving veterans equally, that means they should get the same resources based on their needs.”

Currently, there are more than 55,000 homeless women veterans; making them the fastest-growing homeless demographic, but that’s not the only issue facing females who served.

“Women have unique needs. Just like men will need prostate exams, we need preventative care for the female anatomy. Equal doesn’t mean you get to go to a counselor,” she explains. “What about the mental, emotional and physical needs I have as a woman? Not every VA medical center has OBGYNs or offers pap smears or mammograms or prenatal care. It’s not where it needs to be.”

“The problem with rape and sexual assault in the military is that it’s part of a larger problem permeating our society. Everything that has recently come to the forefront with all these powerful men who have been doing awful things for years are now being called out in the media,” she says. “You can’t have a no-tolerance policy in the military but still have tolerance in American society. Until it becomes no tolerance in American society, and until we are treated with dignity and respect as American women, it’s not going to happen fully in military society.”

According to Jas, the problems facing women in many industries affect women in the military as well.

“We’re not separate. We reflect what we are a part of and that’s America. You have the Brock Turners of the world where the judge doesn’t want to ruin his life just because he raped one woman, and you have a Commander who has a Sergeant First Class who has a great military career that he doesn’t want to ruin because of a sexual assault. . There’s no rule that says, if you rape someone in the military, this happens. It’s not like that. There are options.”

What often makes MST even harder to bare are the unique circumstances that come with serving. Some folks assume that because these women are trained to defend themselves, they’re less likely to become victims of sexual violence.

“Are we equipped to defend ourselves? Yes. Are we prepared to? No. You don’t expect to be raped by your battle buddy or your supervisor. You trust this person. You have established a relationship with them,” she explains.

“It’s a lot like when children are molested by friends or family members. It’s not their instinct to fight back because they still have a relationship with that person and they don’t know how to process that. The fact that someone they trusted and relied on has harmed them is not easy thing for these women to process.”

Jas’ Ms. Veteran America competition provides a platform for women vets to raise awareness about the issues they face while showing off their softer sides.

“Femininity should not be seen as a weakness. Because you’re a woman, you’re seen as weaker. When we put on that uniform we definitely have to give up a certain amount of femininity to serve, but how much bravado do male soldiers have to give up in order to serve? Why isn’t the essence of their masculinity ever attacked or ever managed so much?”

While the competition does include a push-up contest, it mainly highlights more traditional notions of femininity.

“Femininity isn’t just about looks. It’s not just about being prissy or dainty. But it’s about what makes you a woman. What do you draw your strength from as a woman? How do you identify as a woman? In the military, you can’t have your hair a certain way, no makeup, those types of things. They’re stripping things from you because they want you to appear less of a woman,” she explains.

“I’m 40 years old and I’ve been a soldier for 17 years. I’m always gonna be a better woman than I am a soldier any day. I wanted to show people that yes, even with us being women and daughters and wives– that hasn’t impacted our ability to serve our country. We call it the woman beyond the uniform.”

HOW YOU CAN HELP

Now that Served Like a Girl has been released, Jas hopes more people are compelled to help assist and support female veterans in their own communities.

“I tell people they can donate to my organization directly but also see what’s available in your communities. Are there programs in place to support female veterans? Are there shelters there? If not, start knocking of some of your legislators doors and ask why there aren’t any resources,” she says.

“We are hoping to get a home. Right now, we rotate to new places each year. I recently visited the Hollywood American Legion and we’re hoping it can be the home of the competition. It would be great if it was televised and women could showcase their talent on a national stage and raise more awareness. I think the perception of the definition of beauty comes in many forms and I don’t think there’s anything more beautiful than a woman who is going to raise her right hand and die for it.“

Jas also took time to weigh in on the Take a Knee movement.

“I don’t know why it’s mandatory for professional athletes to stand for the national anthem. I have gone to games and the concession stands are open, transactions are still being made. If that’s your stance for some of your employees, then that should be your stance for all of them. For me, freedom of speech is a right. The oath that we take is to the Constitution as service members it’s not to an object,” she says.

“I understand the American flag is a symbol. We are sworn to salute it and respect it and when the anthem plays we pull over in our vehicles and we get out and we salute it. Not every American signed up for that. I don’t expect them to have the same amount of patriotism that I do as a service member. I’m more concerned with what those NFL players do off the field as opposed to what they are doing on the field when everyone is watching.”

Jas’ perspective asks the same from people on both sides of the issue.

“When you stand during the national anthem, are you also taking time to support veteran organizations? Are you donating to veteran’s causes? Are you being a force in your community? Same goes for the people who are kneeling. It’s more about focusing on what they’re doing when nobody is watching,” she says.

According to Jas, athletes who decide to kneel during the National Anthem don’t automatically offend military members.

“I don’t like to be used. I don’t like my service to be weaponized for a political purpose. That’s what irritated me about it. They were clear in why they were kneeling so whether you agree with it or not, there are people who made it about my military service when it was never about that. For a veteran, me, a person who is serving, they may get personally offended because we stand for the flag. You kneeling might piss me off because I’m like ‘ Hey don’t you see a flag? But I know what you’re doing is not against me,” she says.

“I’m more offended that there are 22 veterans committing suicide on a daily basis. I’m more offended by the fact that there are hundreds of thousands of veterans who are homeless. If you care so much about me, do something that is going to help my brothers and sisters and not just a gesture. There are much bigger issues affecting veterans that need to be addressed and supported than the fact that someone is taking a knee.”

Served Like a Girl is now available on Amazon Prime.

For more information on how you can help support female veterans, click here.