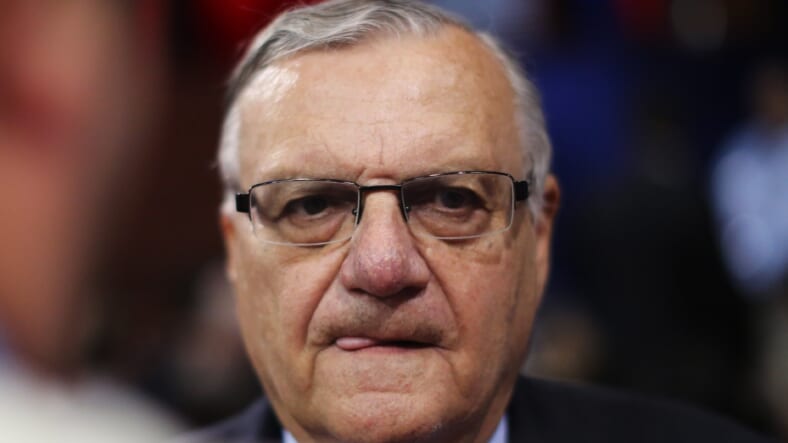 This comes as Arpaio’s state of Arizona, like other states, provide roadblocks for ex-offenders and their voting rights.

With the announcement that Sen. Jeff Flake (R-AZ) will retire and not seek reelection, the field is opening up to occupy his seat. Arpaio– known for his hardline anti-immigration stance, a tough on crime law enforcement policy and unconstitutional racial profiling tactics against Latinos–was convicted last year of criminal contempt for defying a federal court order and refusing to refrain from racially profiling Latinos.

Trump pardoned him because of Arpaio’s “life’s work of protecting the public from the scourges of crime and illegal immigration.” Now, Arpaio, a convicted felon, has the green light and the opportunity to run for the Senate, putting his hat in the ring for the August Republican primary in Arizona.

I am running for the U.S. Senate from the Great State of Arizona, for one unwavering reason: to support the agenda and policies of President Donald Trump in his mission to Make America Great Again. https://t.co/ANppBdDOtp

There is some irony in the fact that a pardoned convicted felon with a history of criminalizing people of color and violating their civil rights now has the opportunity to run for the Senate. Chalk it up to the age of Donald Trump– better yet Roy Moore, who lost his bid for the Senate in Alabama, but still came close despite his racism, misogyny and the alleged sexual abuse claims against him. Welcome to the future of the GOP, where serious character flaws are no obstacle for higher office. Arpaio, with his record of race-based traffic stops and immigration checks, said he is running “for the good of our country.”

A more relevant issue, however, is that ex-offenders across the country have challenges impeding their right to vote. According to Nonprofit Vote, with the exception of Maine and Vermont who allow incarcerated people to vote, all states bar people with a criminal conviction from voting for a period of time. However, those results may vary depending on the state.

In 14 states and the District of Columbia, for example, felons only lose their voting rights behind bars, as their rights are fully restored when they are released, according to the National Conference of State Legislatures.

Meanwhile, felons in 22 states lose their right to vote while in prison and sometime thereafter, typically while on probation or parole, after which time they are able to vote. Former felons may have additional penalties before their voting rights are restored.

And in 12 other states, ex-offenders lose the franchise indefinitely, or require a pardon from the governor or a waiting time after completing a prison sentence to return to the polling place and cast a vote. Arizona falls into this category, as individuals with one felony conviction have their voting rights automatically restored upon completion of their supervised release. However, those who are convicted of two or more felonies, must go to a judge to have their right to vote restored, or receive a pardon.

Felony disenfranchisement laws. 6.1 million people cannot vote because of a felony conviction, according to the Sentencing Project. That includes 1 of every 13 African Americans, 1 in 56 non-Black voters, and approximately 2.5 percent of the U.S. voting age population, or 1 in 40 adults. This makes the U.S., the land of the free, one of the strictest nations for felony disenfranchisement.

“Given current rates of incarceration, three in ten of the next generation of black men can expect to be disenfranchised at some point in their lifetime,” according to the Sentencing Project. “In states that disenfranchise ex-offenders, as many as 40% of black men may permanently lose their right to vote.”

Given these disturbing statistics, it is no wonder that these laws are rooted in racism, as Southern states enacted these laws after Reconstruction and during Jim Crow specifically to deny voting rights to Black people. By 1869, 29 states had such laws on the books. In Mississippi, for example, still one of the most restrictive states, the felon disenfranchisement laws were designed to prohibit Black voting by targeting presumably Black crimes such as burglary, theft, and arson, rather than murder or robbery. The author of the Alabama law that disenfranchised Black men for beating their wives but not killing them “estimated the crime of wife-beating alone would disqualify sixty percent of the Negroes.”

Joe Arpaio is running for Senate, and that’s a problem, though it is his right to run and likely lose.

Arpaio, who lost his 2016 reelection bid for sheriff, would almost certainly suffer the wrath of Latino voters. The former sheriff who once violated the rights of Latinos was convicted for it. He now runs again for office after receiving a pardon from his political ally the president, who is hell bent on voter suppression.

Meanwhile, many others who have paid their debts to society cannot even cast a ballot and that’s a problem.