SHE TRIED IT: Stacey Dash thought it was a good idea to come for Oprah

Stacey Dash thought it was a good idea to come for Oprah Winfrey, and she quickly found out the hard way that you don’t take shots at the queen.

On Wednesday, the actress and ex-Fox News darling tweeted out a fake news story about Winfrey titled “Oprah Under the Microscope: 12 Skeletons She Can No Longer Hide In Her Closet.”

“This cannot be dismissed. Oprah must be forced to answer to these if she’s going to ask for our vote…,” Dash tweeted to her 564,000 followers. 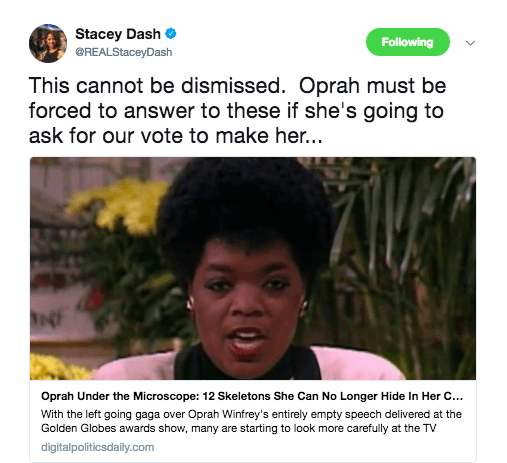 Soon after, Twitter let the former “Clueless” star have it.

“You want to be Oprah don’t you? LOL” tweeted one user, to which Dash responded, “No. LOL.”

That same user followed up with a screenshot of Winfrey’s net worth, according to Forbes: a whopping $3.1 billion. “You want to rethink that?” he tweeted.

Other users called out the hypocrisy in Dash criticizing Oprah’s “past” and possible presidential run, and yet not hold President Donald Trump to the same standard. “So we just gonna act like @realDonaldTrump doesn’t have sexual allegations and collusion accusations?” one user tweet.

“You’re always pointing out people‘s faults or negative things about people. Why don’t you ever do this about @realDonaldTrump or things he’s done/does or says wrong?” wrote another user.

You want to rethink that? pic.twitter.com/tjrXXah4tc

This article is so laughable. ? The only REAL issue she may have on her hands IF she decides to run is her POSSIBLE relationship with Weinstein. A few photo ops does not equate to a relationship.

If White women will vote for an admitted sexual predator, Oprah skeletons are a non- starter…

This is so unfair to Oprah. She hasn’t announced anything and you guys are throwing out hit pieces already. You guys are shameless! By the way, those 12 so called skeletons of Oprah’s have nothing on Trump’s skeletons. For Christ sake he’s under criminal investigation.

The right is petrified of president Oprah, already ? I am the right, she would be formidable

I have so much to say regarding this post, it would take 9 tweets, and I just won’t do that. I’ll just say this, I researched every one of these “skeletons” via the links provided and more. Clearly, you didn’t. Its’ all garbage, and so are you for posting this. #sick #pathetic

This is so unfair to Oprah. She hasn’t announced anything and you guys are throwing out hit pieces already. You guys are shameless! By the way, those 12 so called skeletons of Oprah’s have nothing on Trump’s skeletons. For Christ sake he’s under criminal investigation.

So much for running back to the Black community

Just last month, many wondered if Dash, once a treasured beauty in Black culture, was trying to claw her way back in the community good graces.

After appearing in a trailer for a film produced by her cousin, Damon Dash, ESPN host Jemele Hill pointed out the funny irony.

Hill had more to say too. “I just find it really interesting Ms. Why Isn’t there a White History Month (yeah she said that) is constantly positioning herself with an audience she clearly despises, on some level.”

Hill knows what she is talking about when it comes to Dash’s opinions. Dash herself has always been outspoken and shared these thoughts on Fox News, even when she was better off staying quiet.

In the past, Dash has called Congresswoman Maxine Waters a “buffoon,” commented that transgender people should use bushes for washrooms, and even downplayed the importance of Black History Month by asking why there isn’t a White History Month.

She also referred to actor Jesse Williams as a “plantation slave” after he gave a speech when winning the 2016 BET Humanitarian Award.

Honor Up will be released in February, which is ironically Black History Month and though her cousin said she was involved in the film, Dash herself has denied being involved in the movie.

“I’m sorry that my cousin Damon Dash is using our family relationship to advertise his movie. I have no written contract with him or Kanye West’s company (who I have had no dealings with at all). No one is authorized to use my name or photograph for ‘Honor Up.’”