Kim Zolciak-Biermann and Kandi Burruss are at war on Twitter, after Kim accused Kandi of offering to perform oral sex on her.

Well, apparently Kim’s claims did not go over well with Kandi, who took to Twitter to put her on blast.

‘This is my house. You’re just a visitor!’

On Sunday, Kandi was quick to remind Kim, who is no longer a main cast member, that she is the Queen peach in charge. “Somebody’s really reaching for a permanent peach here… This is my house. You’re just a visitor!”

–T.I. and Kandi Burruss give back in major way to single moms families–

“I’m sick of these bitches lying on me. @KimZolciak I have NEVER wanted you or your box. And stop swearing on your kids while you’re telling lies. Lying ass bitch.”

Minutes later, Kim fired back: If anybody is lying it’s you @Kandi You and your husband are full on swingers fucking all kinds of girls and can NEVER admit it. And bitch if it weren’t for me there would be no house. Remember I built this house!” 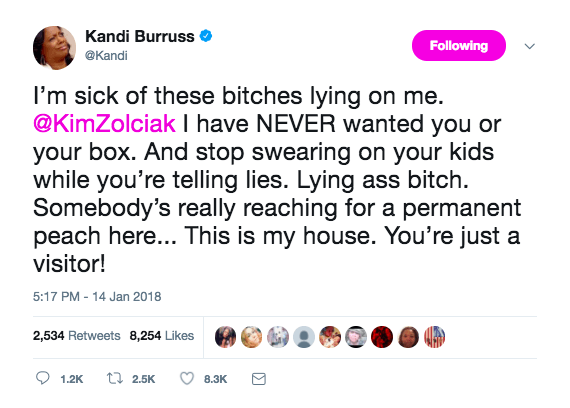 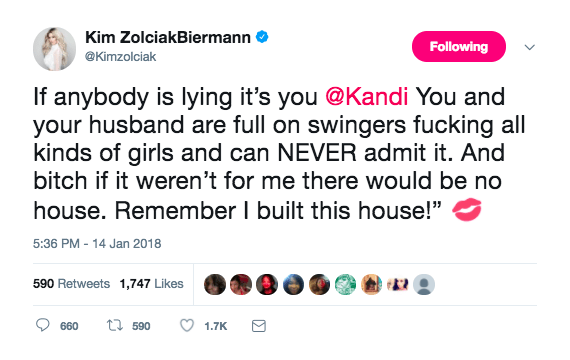 Regular viewers of RHOA know that this isn’t Kim and Kandi’s first falling out. The ladies were at odds seasons ago over money Kandi felt she was owed after writing and producing Kim’s mildly successful song “Tardy For the Party.”

At the time, Kandi admitted to not drafting a contract with Kim because she apparently assumed Kim, as a friend, would have given her a portion of the sales.

The song would later become the straw that broke the camel’s back. It appears there’s no repairing their friendship now.

Of course, the Housewives’ latest drama did not go unnoticed online. Check out some of the reactions below.

kandi we don’t believe you unfortunately

Speak for yourself. Kandi is the only one on the show who hasn’t lied. Never wavered whenever confronted about anything and has been this way consistently. Roll tapes and you’ll see. It’s like I tell people, you may not like what I said or the delivery but it will be the truth. pic.twitter.com/xQ3DtOC6gP

Yes Kandi!!!! And Kim still needs to pay those #Tardy cheques she owes you from season three.