The celebrated comedian and radio personality offer this and other words of wisdom. 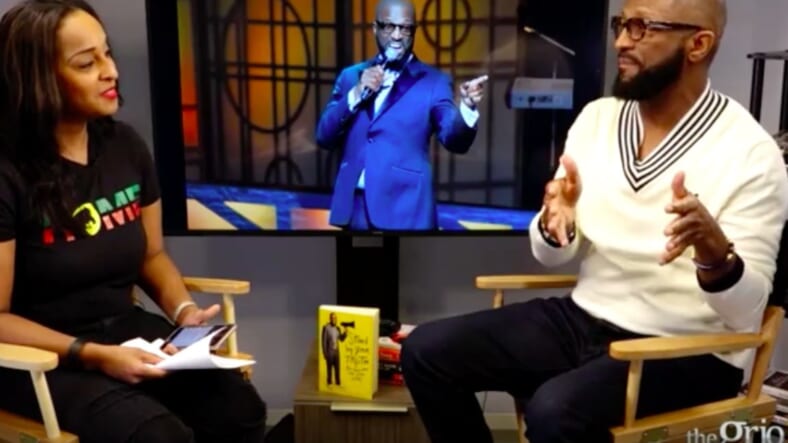 theGrio.com’s Natasha Alford and radio host Rickey Smiley chop it up during our exclusive interview.

Comedian and TV/radio host Rickey Smiley says modern racists who are inspired by President Donald Trump, might want to fall back.

Smiley, who is a big-time University of Alabama football fan and hails from Birmingham, weighed in on the (now former) college sorority girl, Harley Barber’s racist videos where she is heard using the n-word.

“It doesn’t surprise me,” Smiley told theGrio exclusively in a recent studio interview. “A lot of that stuff is from the top. Donald Trump has made people like that feel comfortable in saying stuff like that.”

“Now what it has done is made part of the younger demographic comfortable enough to say certain things. As they say in the black community, they feeling themselves now,” says Smiley.

“But don’t get it twisted… Black people will mess you up. You get to sayin’ something, get your lil mouth running or whatever. We are not the turner-of-the-cheek generation.”

Smiley, a father of four, has children in college and says ultimately, the school did the right think by expelling Barber.

“I think that’s great for the University of Alabama to send a strong message, that this behavior will not be tolerated.”

“I hope that’ll be a life lesson to her because more than her being suspended, I think it might save her life. She may go and say that at the wrong place and wrong time and get killed or something because there’s a lot of people that don’t play that.”

Smiley who recently authored a book, “Stand By Your Truth: And then Run For Your Life,” says so many issues with today’s generation, regardless of color, come down to home-training.

“I was raised around both sets of grandparents and great grandparents.  So I was taught how to be decent and in order.  And I just try to pass it along.”

Check out the full interview with the beloved funnyman below!

Rickey Smiley Official FanPage is here LIVE with us in studio, and he's spilling the tea on his new book, and thoughts on the racist The University of Alabama sorority girl who was expelled.