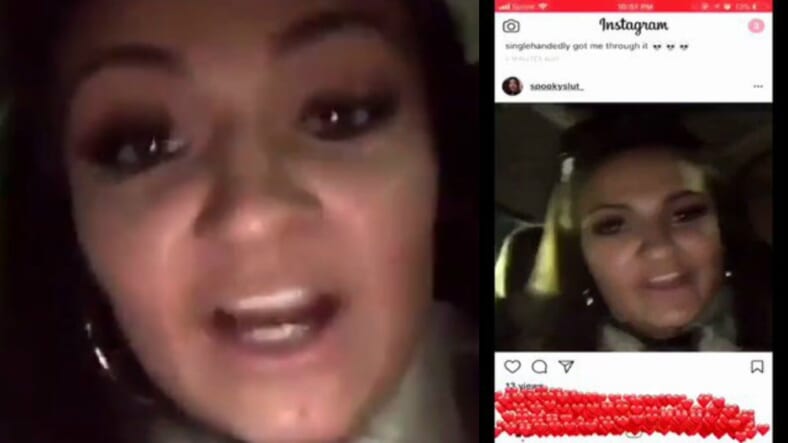 Updated: The University of Alabama has confirmed that Harley Barber is no longer enrolled at the school.

“In light of the racist and disturbing videos posted by one of our students on social media, I want to express my personal disgust and disappointment.

Like many of you, I find the videos highly offensive and deeply hurtful, not only to our students and our entire University community, but to everyone who viewed them. The actions of this student do not represent the larger student body or the values of our University, and she is no longer enrolled here.

We hold our students to much higher standards, and we apologize to everyone who has seen the videos and been hurt by this hateful, ignorant and offensive behavior. This is not who we are; it is unacceptable and unwelcome here at UA. These types of incidents affect community members differently. If you have been impacted and would like additional support, please access resources here that are available to you on our campus.

Over the last year, I have had conversations with many of you who shared your UA experiences with me. You have voiced your pride in the progress we have made, but we still have much work to do. I want to thank all of the students, faculty and staff who met today to have conversations about this event and the steps we can take, individually and collectively, to create a more welcoming and inclusive campus. You have my commitment and the commitment of our leadership team to sustain progress and address directly any issues that arise.

I know you join me in taking a stand against this and all reprehensible behavior. As members of this community, we are a family and this is our home. Everyone has a right to feel safe and welcome here.”

The University of Alabama student who posted two Instagram videos of herself hurling the n-word has been identified as Harley Barber.

In one video where she gleefully chanted the n-word in a car while surrounded by giggling girlfriends, she noted that she was a member of the Alpha Phi sorority. As of today, that is no longer the case.

@TabisBack @UofAlabama Alpha Phi is a diverse, values-based organization and condemns the language and opinions in these videos. They are offensive and hateful to both our own members and to other members of the community. Ms. Barber is no longer a member of Alpha Phi.

Barber has also been banned from Rounders, the bar where she filmed herself in a bathroom proclaiming that she hated n*ggers. The bar is a popular hangout for University of Alabama students.

The university issued a statement condemning Barber’s words and noting that her behavior has been reported to the Office of Student Conduct. Barber’s crass videos went viral after fellow University of Alabama students posted the videos on Twitter.