Wendy Williams is ‘sick’ of #MeToo, says some R. Kelly accusers ‘chose’ to be victimized 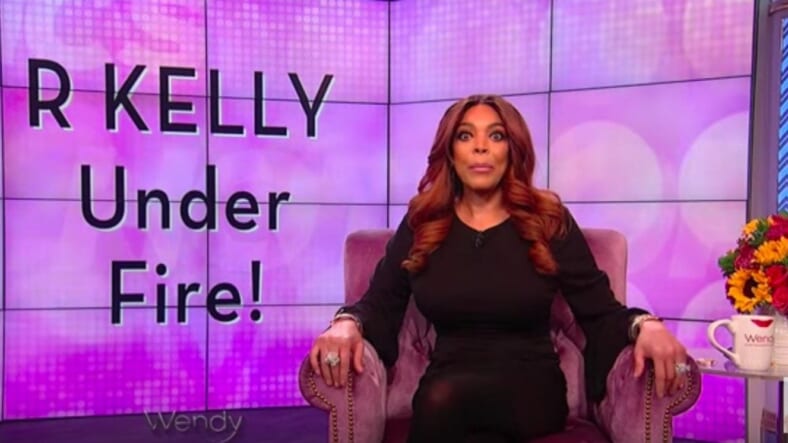 Wendy Williams made some rather interesting comments about the #MeToo movement and a recent grassroots campaign to boycott R. Kelly.

“The #MeToo movement hasn’t affected R. Kelly, because R. Kelly, he wasn’t a #MeToo,” Williams continued. “Aaliyah voluntarily married him when she was 15 years old. And her parents voluntarily let her do it, when she was 15 years old. And that little girl that I saw from my own eye balls that he urinated on and he had his way with, was there at his house, she let it go down.”

Williams went on to blame the parents of R. Kelly’s alleged victims, and explained that she didn’t see a connection between the young women reportedly being kept away in the singer’s home and his long documented predatory behavior.

“The multiple allegations of R. Kelly holding women in his own home. Where are their parents? This is a whole different thing, it has nothing to do with #MeToo,” she added. “R. Kelly is just a very very sick man.”

Later in the same “Hot Topics” segment, Williams scoffed at the #MeToo movement.

“I’m sick of this #MeToo movement,” she said. “I love that people are speaking up for the first time and speaking out and everything, but now…I look at all men like you’re a #MeToo, all of them, all of them, which is not fair.”

Unsurprisingly, Williams’ comments didn’t go over well on Twitter. Take a look at reactions below.

I heard what Wendy said yesterday and was disgusted by it. This is why Black women/girls are hesitant about coming forward with their #metoo stories bc of Black women like @WendyWilliams who blame the victim. You really think a 13 y.o. girl is to BLAME for sex w/ a 30+ y.o. man?? https://t.co/0mCmAnd0at

It is disgraceful that as wide as your audience is and as many young girls, many Black girls watch your show that you would openly victim blame like you did yesterday. You are the reason why we can’t make headway in our community around sexual violence. @WendyWilliams

You are doing the very same thing that white folks do to our girls which is forget that they are CHILDREN!!
R. Kelly PREYS ON CHILDREN! Stay right there for a second. You @WendyWilliams said you WATCHED the video and was disgusted but she’s not a #metoo

Wendy Williams just said black ppl aren’t good at protesting, 15 yr old Aaliyah voluntarily married R Kelly and that the girl he peed on let it go down. All in the same breath. Not surprised but it’s annoying ppl still think this way. ??‍♀️

Oh, @WendyWilliams.
It doesn’t matter if the underaged girls wanted to be there or not.
It’s still illegal… and sick.#MuteRKelly #metoo #TimesUp

@WendyWilliams You are part of #RapeCulture missy. When women put down and disbelieve other women’s stories about sexual assault, then women don’t report. I was raped and my friends accused me of inviting it because of my actions. Are you kidding me? #MeToo #TimesUp

Wendy Williams needs to take a seat… of course she don’t understand the #MeToo movement… she’s a damn cartoon character, I can’t take her seriously.

I’m wondering if Wendy has some hidden trauma in her life that makes it easier to blame the victim?