Janelle Monae delivers powerful #TimesUp speech at Grammys: ‘We come in peace but we mean business’

Janelle Monae puts the world on notice that women won't be silenced in stirring #TimesUp speech at the 60th Annual Grammy Awards in NYC. 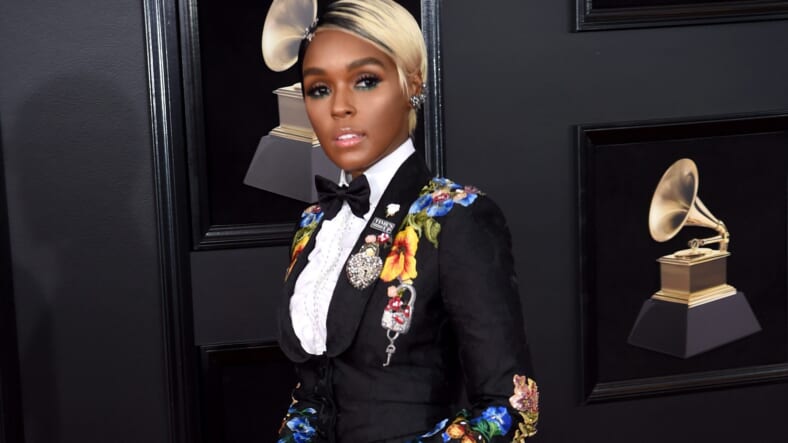 Janelle Monae took the stage at the 60th Annual Grammy Awards and delivered a powerful speech putting the world on notice that when it comes to the music industry, #TimesUp.

The singer/actress/ all-around badass dazzled in an embroidered, floral suit and blonde highlighted hair when she shared her stirring words.

“Tonight, I am proud to stand in solidarity as not just an artist, but a young woman, with my fellow sisters in this room who make up the music industry — artists, writers, assistants, publicists, CEOs, producers, engineers, and women from all sectors of the business,” she said. “We are also daughters, wives, mothers, sisters, and human beings. To those who would dare try and silence us, we offer you two words: #Timesup. We say Time’s Up for pay inequality, Time’s Up for discrimination or harassment of any kind, and the abuse of power.”

“We come in peace, but we mean business,” she declared.

“It’s not just going on in Hollywood, or in Washington, it’s right here in our industry as well,” she went on. “And just as we have the power to shape culture, we also have the power to undo the culture that does not serve us well. So, let’s work together, women and men, as a united music industry committed to creating more safe work environments, equal pay, and access for all women.”

READ MORE: After 12 Grammy noms, will Ledisi finally win? Why she says she’s OK either way

Monae was there to introduce Kesha, who delivered a moving performance of “Praying,” with Bebe Rexha, Julia Michaels, Cyndi Lauper, Camila Cabello, and Andra Day joining her onstage.

All of these ladies showed their support for Kesha who has spent the last few years in a very public battle with producer, Dr. Luke, accusing him of sexual assault and battery among other things.

“This fearless, two-time Grammy nominee inspired so many of us, including myself, when she spoke her truth on her album, Rainbow, which is nominated for Best Pop Vocal Album tonight,” said Monae.

“We’re honored to stand with you and welcome you, Kesha.”

Take a look at her inspiring speech for yourself.

Janelle Monáe just dropped the mic at the #Grammys for #TimesUp and the #MeToo movement. pic.twitter.com/B1HKNFAFVJ