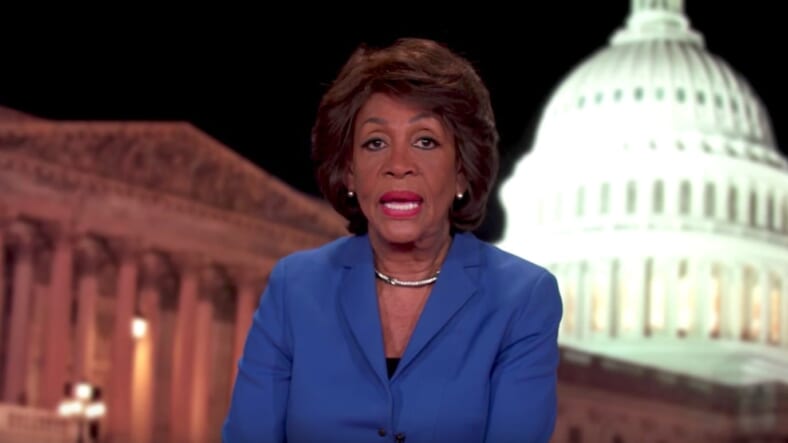 The California congresswoman made that very clear in a 5-minute shade throwing rebuttal on BET’s Angela Rye’s State of the Union.

“One speech cannot and does not make Donald Trump presidential,” Waters said in her address that aired Wednesday night. “He’s not presidential and he’ll never be presidential. He claims that he’s bringing people together, but make no mistake, he is a dangerous unprincipled, divisive and shameful racist.”

Waters pulled out the receipts on Trump’s record, particularly building wedges in America based on race. Waters reminded viewers about Trump’s racist presidential campaign and his apologist stance as president when addressing hate groups like Unite the Right in Charlottesville and the KKK.

A Trump advisory for children

Waters held nothing back in her rebuke of Trump, calling him a “terrible role model” for children in America and suggesting there should be a parental advisory warning when he speaks on TV.

“He stokes racial animosity by referring to Black NFL players as sons of bitches and demonizing immigrants from Haiti and Africa,” Waters said. “This president, with his vulgarity and his disrespect for women and people of color, is a terrible role model for our children. Whenever he appears on TV there should be a disclaimer that says ‘this may not be acceptable for children.'”

Rep. Waters also called out Trump for not acknowledging the legacy of former president Barack Obama. Waters reminded viewers that it was the nation’s first Black president who pulled the U.S. economy out of a potentially disastrous recession.

Trump, she says, “brags about himself,” but does not take the time to learn about public policy or learn about the challenges before America and the world at large. “He has no understanding of true leadership,” she adds.

Auntie Maxine wouldn’t be Auntie Maxine without mentioning the magical word: Impeachment. The ranking politician says the time is now to rise up against Trump and call for his removal from the Oval Office.

“Some believe it’s too early–I disagree,” Waters said. “The time is now. We must organize, challenge and resist.”