Tami Roman rails against ladies of The Real: ‘I haven’t watched since Tamar left’ 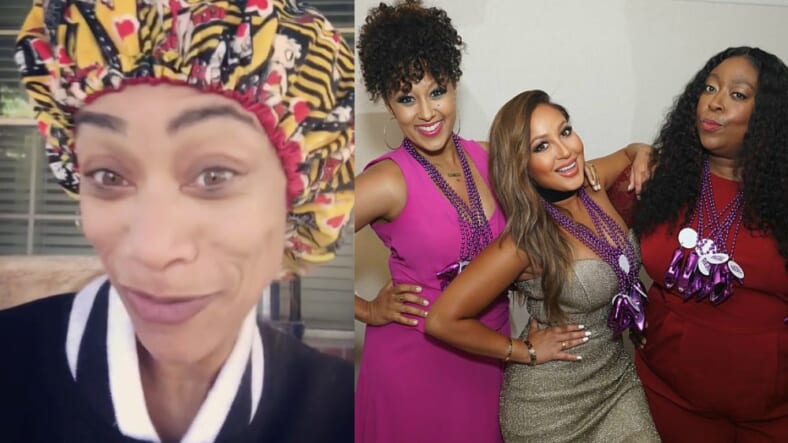 Apparently, the ladies of The Real weren’t down with her message, though, because they posted this question on their Instagram page: “What do you think about Tami Roman saying Kanye should stop Kim from posting sexy pictures?”

What do you think about Tami Roman saying Kanye should stop Kim from posting sexy pictures? #GirlChatLive

Fans informed Roman that the ladies of The Real were talking about her on their morning talk show, prompting her to post another video, this time slamming them for taking her words out of context.

“Let me start by saying I did not watch the show because I do not watch The Real. I have not watched it since Tamar left,” she said in the video. “But it was brought to my attention that they discussed my post about Kim Kardashian. I do not know what was said, but I was told they were being messy about the post I put up and my point of view. ”

Clearing things up, Roman says, “I was actually uplifting her and empowering her by acknowledging all that she has accomplished,” adding, “the fact that you four ladies sat on that show and tried to minimize it and even tried to be messy about it is the reason you all should be off, okay.”

Tami specifically called out co-host Loni Love. “I’m surprised at you,” she said, “because I thought at the very least you would understand.

What Roman said to Kim

After Kardashian showed off as much of her nude body as possible without getting kicked off of Instagram for violating their guidelines, Roman took to Instagram herself with some advice: Stop it.

A post shared by BonnetChronicles™ (@officialbonnetchronicles) on Jan 30, 2018 at 7:21am PST

She started out her address to Kanye West and kept right on laying down the law from there.

“You know, it hurts my heart to say this, because I love this man. I think he’s so talented. I think he’s a genius. But your Black card gets revoked today, Kanye,” Roman said. “Because it ain’t a Black man alive that would let his wife pose for the ‘Gram like that unless he pimpin’.”

“But listen, this ain’t about the Kardashians, because I like the Kardashians,” she continued, adding that Khloe was her favorite. “But, um, Kim, I just want to say: Under the stage of life that you’re in right now, you’re a wife, you’re a mother a three beautiful kids, and you’re a businesswoman, we cannot negate the fact that you have built an empire. And maybe you’re just doing what you know how to do, the only thing you know how to do, how you got in the business, I don’t know. But you past that now, okay?”

By the end of the video, she had sage words of wisdom: “Think about what would Beyonce do. And it ain’t that.”

It looks like Roman isn’t going to take any nonsense from anyone, and we’re here for her words of wisdom.