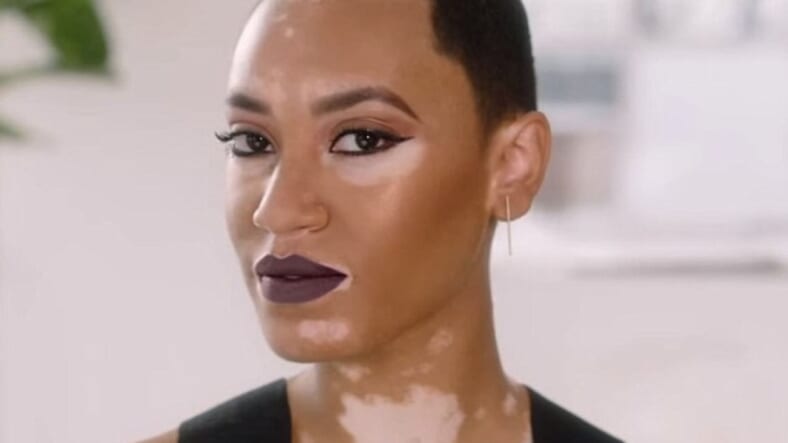 Amy Deanna is breaking barriers thanks to CoverGirl.

For the first time, CoverGirl is featuring a model with vitiligo in a dynamic new ad campaign.

Texan model Amy Deanna, is starring front and center in their new foundation ad that shows her applying the product to her face while asking, “Why try to blend in when you can choose how to stand out?”

Deanna has praised the iconic makeup company for giving representation to those who have vitiligo which leaves the skin with uneven skin tones in patches.

Amy Deanna shares beautiful photos of herself regularly on Instagram showing the variations in her skin tone. She poses confidently in beautiful images that show how she has lighter patches of skin on her face, upper body and neck.

“Vitiligo awareness is something that is very important to me,” she said of her new CoverGirl campaign. “Being given a platform to do so means so much.

“At the end of the day I am just like everyone else, I just happen to have spots. It’s a part of my identity, but it doesn’t define who I am.”

The model also said she finds it heartbreaking knowing that so many people who have vitiligo don’t feel represented by most of the beauty ads.

“For there to be so many of us and so little representation, it’s truly disheartening,” she went on. ‘I work with CoverGirl; I’m a black woman; I have vitiligo. That is empowering.”

Amy Deanna told People magazine that she was inspired by other African-American CoverGirls such as Rihanna, Queen Latifah, Zendaya, and Issa Rae, to join the list of empowering women.

“I believe that inclusiveness will challenge unrealistic beauty standards within the beauty industry and in humanity,” she stated.

And the Texan beauty has advice so other young women can develop more self-confidence.

“I often find myself trying for perfection. It’s just not realistic,’ she said. ‘No one is perfect all the time.”