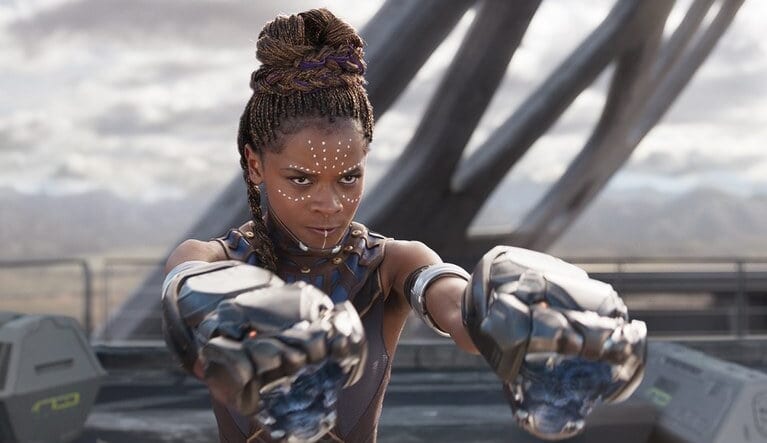 Letitia Wright as Zhuri, the little sister and brain behind the science in Wakanda. (Photo Cred: Marvel)

One of the most pleasant surprises in Black Panther is the incredible performance provided by Letitia Wright who plays tech genius Shuri in the film.

The 24-year-old breakout star of the record-breaking blockbuster already has several acting credits under her belt but her rise to fame is just getting started. She will return to the big screen and reprise her role as T’Challa’s super smart sister in May in the upcoming Marvel flick, Avengers: Infinity War and her inspiring performance has her name on everyone’s lips.

Here are 5 things to know about Black Panther‘s breakout star:

Wright was reportedly bitten by the acting bug after watching Keke Palmer’s performance in Akeelah And The Bee in 2006. Unfortunately, her parents weren’t onboard with her plan to pursue it as a career. “In my country where I was born, Guyana, we push more for education. . . . It’s more being a lawyer, doctor, teacher, or scientist. So it was something I had to just really prove—not only to myself, but to my parents, that I could do it, and I can make a living from it, and that I was kind of good at it,” she told Vanity Fair.

She’s open about her depression struggles.

Another reason to love Letitia Wright is her willingness to discuss her struggles with depression. At a time when mental health continues to be swept under the rug in our communities, she’s speaking out about her battle that begun at age 20.

“I was in the dark going through so many bad things, when the world didn’t know about Shuri and Letitia and whatever is happening now,” she told Vanity Fair.

Wright found her faith at the height of her depression when her friend and fellow actor, Malachi Kirby (Roots, Black Mirror) brought her to bible study. She became so committed other newfound faith, she declined a role in a Nicole Kidman film to focus on her relationship with God. Her social media pages are constantly updated with inspirational quotes and religious-themed messages.

“Everybody has their thing that they’re truthful about. My thing is just a love of God… so that’s what I’m going to do,” she told Vanity Fair.

She’s super selective about her roles.

Wright is incredibly selective about the kinds of roles she accepts.

“I want you to leave with something. Whether you leave feeling inspired like what Shuri leaves you with or you leave thinking about all the black men that are put in prison and [are] being used…I don’t want to do it just to do it,” she told the LA Times. “[It] doesn’t necessarily have to be a political storyline or topic, but it has to have something to say, there has to be of some type of meaning. It has to be worth my while so it can mean something to someone else to sit there for an hour and watch it.”

Letitia Wright says she always won the epic rap battles she and her Black Panther co-stars hashed out on the set.

“Danai [Gurira] tried a lot, but she failed, epically… I’m still the queen of rap battle in Wakanda,” she told Vanity Fair.