This teacher believes money allocated to teacher weapons training could be much better spent. 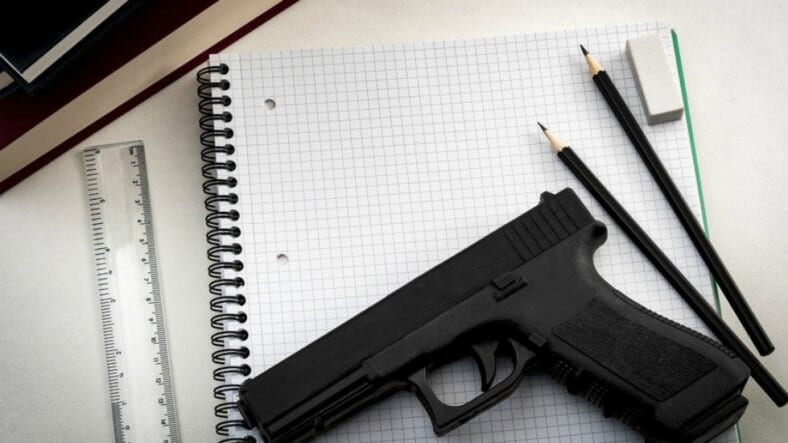 Donald Trump would like us to carry guns–“us” being educators.

Your president wants a percentage of teachers to give their literal lives for their students.

This is redundant because if killing someone, slowly or instantly, for their beliefs makes them a martyr, educators are already there.

Yet, it is only passion that could push someone through multiple degrees, licenses, politics, and subjective protocol to stand in front of children each day and lead.  Only in America do educators work an 8-hour day, and then go home to work an additional 3-4 hours that go unaccounted for in our salaries, putting us on par with making little more than the minimum wage.

It is our belief in our kids that drives us to rise every morning and set out for work before our peers without fail. It is only belief in the power of these rising generations that keeps us uplifted until retirement despite the lean education we are asked to force feed to students for satisfactory test scores. This is despite a war on innovation and individuality in the classroom, and being urged to display data amongst peers with an emphasis on “you’re not good enough” and “you’ve got to do more”–reducing our complex and nuanced work to cold, flat numbers.

We are already martyrs, killing ourselves, because we believe in children and their education.

Here’s why this educator ain’t gonna be nobody’s “adept” shooter:

I watch the homes in my Brooklyn neighborhood, which have held generations of Black lives, be pulled into submission by quick dollars and rising rents. Once upon a time, it used to take at least 30 minutes for an ambulance or squad car to arrive if you were having an asthma attack or being assaulted. Now, they are there even before you need (or want) them.

At my train stop, when I’m coming home from midnight poetry slams or prepping before parent-teacher conferences, beat cops will ask me with a 1950’s tongue, “Why are you out so late? You should be home, girl.” I’m 30 and the “girl” at the end of their sentence makes me feel inferior, like a child.

It’s nights like these that I walk my block thinking of Philando Castile, who worked in a school, carried a gun, warned the officer that he had a registered gun, and was still shot. Your President wants me to carry a registered gun, too.

I once had a principal say to me, “Why can’t the children draw the maps? Why do we have to buy that?”

She accidentally sent me an email that was supposed to be forwarded to her Director of Operations, on top of my request, “I told her no. We’re not buying maps for teachers to decorate their classrooms.”

I’m a world history teacher. My former principal believes that a $25 world map is a mere decoration. It is moments like these that cause educators to spend thousands of dollars in supplies, every year, despite receiving $250 or less back via taxes. This is the same $250 that would have been eliminated due to the House’s initial tax reform bill. And yet, we have money to supply us with guns and bonuses?

How about the child who asks me to walk him home every evening? He stands at my desk, long after the other kids have left, and says, “Ms. Buddington, they respect the staff shirt. They won’t touch someone who loves the community.” I smile because I know there is truth to his statement.

An organization I worked for was woven through his neighborhood, a quilt to our people. We walk past the boys that have threatened to jump him. They grimace but they don’t say a thing. One pokes his head out, amongst the others, and says, “Wassup, Ms. B?” We repeat this walk everyday until he disappears for a week.

He walks back in on a Monday, as if seven days haven’t passed, as if my world didn’t stop when I called his mother and knocked on their door with other educators to no avail. When I ask him where he’s been, he shrugs his shoulders, “I got shot a few days ago. I’m good.” How would me having a gun have helped him then?

Instead of a martyr, make me a hero, not with the incompatibility of a handgun against an AR-15 but with the resources I need to make my instruction whole. Fill my shelves with books, so that scholars could see reflections of themselves as living and breathing instead of slaughtered.

Train educators to make them feel safe, instead of walking on their backs and denying them their names and their history. Give my scholars trips to places that will solidify their learning outside of how to trip up an active shooter. Put those bonuses into a gun reform that looks like a teen walking home safely, a teen that isn’t always in fear for his life, a teen that is denied a gun when he requests one.

We are already martyrs.

We need the tools to do our jobs.

We need you to do yours.

Erica is and educator and the founder of Langston League, a culturally responsive curriculum design firm, based in Brooklyn, New York. You can find her on Twitter.