The company agrees that thoughts and prayers are no longer enough. 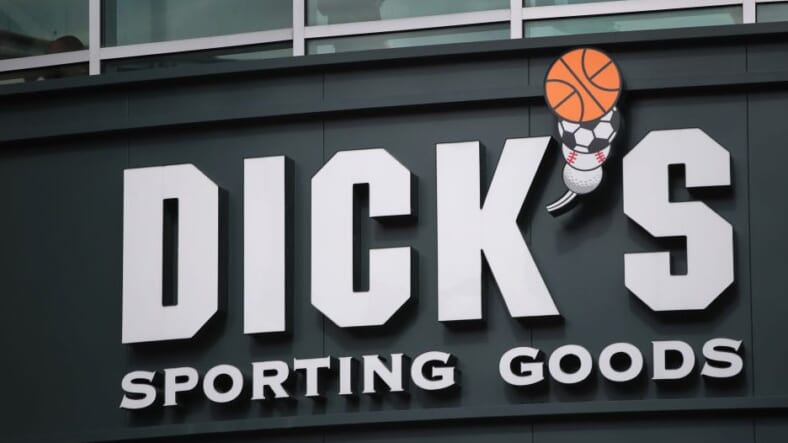 Citing the recent shooting at Stoneman Douglas School in Parkland, Florida, the sporting goods retailer announced today that it would no longer sell firearms to anyone under 21 years of age, no longer sell high capacity magazines, and would no longer sell assault-style rifles at any company owned stored. (Photo by Scott Olson/Getty Images)

Dick’s Sporting Goods, the largest sporting goods retailer in the United States, has announced that in the wake of the mass shooting in Parkland, Florida two weeks ago, it will no longer sell assault-style rifles (otherwise known as modern sporting rifles) or any of the accessories used with weapons (like the AR-15 rifle that was used in the deadly shooting.)

While Dick’s branded stores stopped selling military-style semiautomatic weapons after the Sandy Hook shooting, 35 Field and Stream stores continue to have them in stock. Finally, the outlet has decided to forgo the sales of assault-style rifles in all of its stores.

While the company acknowledged in a press release that it would likely see backlash from gun lobbyist, they believe they are acting in the best interest of the company  after witnessing the aftermath of the Parkland shooting and hearing the stories and impassioned pleas from its survivors.

“The hunt business is an important part of the business, no doubt about it. And we know there will be some backlash,” Dick’s CEO Edward Stack said on CNN’s “New Day.”

But, he said, the company stood behind its decision.

“As we sat and talked about it with our management team, it was— to a person— that this is what we need to do,” he said. “These kids talk about enough is enough. We concluded if these kids are brave enough to organize and do what they’re doing, we should be brave enough to take this stand.”

In particular, Stack said, the company felt “a pit in our stomach” when they learned that Parkland shooter, Nikolas Cruz, had purchased a gun from Dick’s. Even though it wasn’t the AR-15 rifle that Cruz used in the shooting, Stack said that the company wanted nothing to do with mass shooting narratives.

READ MORE: CARDI B SHARES HER THOUGHTS ABOUT GUN CONTROL

“We don’t want to be a part of this story any longer,” he said.

It’s worth it to save “even one life”

“We support and respect the Second Amendment, and we recognize and appreciate that the vast majority of gun owners in this country are responsible, law-abiding citizens,” he said. “But we have to help solve the problem that’s in front of us.”

“Some will say these steps can’t guarantee tragedies like Parkland will never happen again. They may be correct—but if common sense reform is enacted and even one life is saved, it will have been worth it,” he also wrote.

Despite intense lobbying and protests as part of the #NeverAgain movement spearheaded by the survivors of the Parkland shooting, local and federal governments have yet to act to enact any gun reform. Dick’s publicly encourages elected officials to “enact common sense gun reform and pass regulations such as banning assault weapons, raising the minimum age to purchase firearms to 21 and do deeper background checks on customers.

It seems companies like Dick’s is making more headway in less than a month than the government ever has.