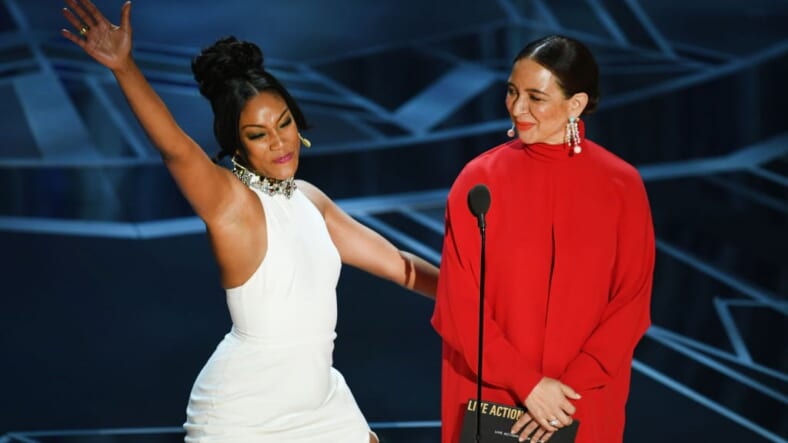 Tiffany Haddish had the night of her life at the 90th Annual Academy Awards as the in-demand comedian made the best jokes of the evening and turned heads on the red carpet.

Here’s the top four reasons Tiffany was the best part of the Oscars last night!

—Jordan Peele makes history with Oscar win for ‘Get Out’ screenplay—

2. She Will Climb Over a Rope to Say Hello to Meryl Streep: Our cousin Tiffany Haddish was not afraid to hike up her beautiful Eritrean gown to climb over the velvet rope on the red carpet. Haddish pulled of the somewhat impressive logistical feat (given the volume of her gown and the height of her heels) to say hello to living legend Meryl Streep. During the pre-show with Ryan Seacreast, Haddish let it be known that she was on a mission to meet Streep. “I’m looking forward to meeting Meryl Streep and asking her to be my mama,” she gushed. No word on whether or not Streep acquiesced to the request.

3. She had the Funniest Lines of the Night: When Tiffany Haddish hit the stage in her slippers with Saturday Night Live alum Maya Rudolph to present the award for Best Documentary Short Subject, the two bantered like they were besties and had all of us wishing they would team up for a comedy. Riffing on the topic of diversity the two ladies joked about those wondering if the Oscars are too black now that nominees of color are getting more recognition from the Academy. But no worries because Haddish and Rudolph put that concern to rest and assured Sunday night’s audience that there are still loads of white people working at the Academy even though the #OscarsSoWhite hashtag has taken a backseat of sorts. The dynamic duo cut up and had the audience cracking up assuring the audience that blackness was still in the minority. Can the two of them host the Oscars next year?

4. She Rocked Her Favorite Dress for the Third Time: Wearing a gorgeous white gown Tiffany Haddish proved she knows how to make a bold fashion statement. To present the award for Best Documentary Short Subject, Haddish changed out of her regal Eritrean gown and donned the sleek Alexander McQueen dress that she wore to both the Girl’s Trip premiere and to host Saturday Night Live. She joked during SNL that the $4,000 dress was so expensive that she was determined to get her monies worth. “I feel like I should be able to wear what I want, when I want, no matter how many times I want, as long as I Febreezed it,” she joked on the show.

5. She’s Shaking off the Beyonce Drama: Last month that Tiffany Haddish was on TV One’s Uncensored and she discussed meeting Beyonce and Jay-Z. She told the story of how when Jay was talking to a woman who happened to touch him on the chest when “Beyoncé came walking up like… ‘Biitttchhh!’ But, she didn’t say that. But her demeanor, her body from the way she walked up on them said ‘Get your hands off my man’s chest.’” Apparently that may not have sat well with Queen Bey, who appears to have clap back over the breach of confidence in her lyrics on the new song with DJ Khaled and hubb Jay-Z: “If they’re tryna party with the queen/ They gon’ have to sign a non-disclosure,” Bey rapped on the DJ Khaled single.” Ouch. Haddish took to Twitter to respond: “I Love Beyonce part! Everything she said rang so real to me. Just know I will sign A NDA any day For Beyoncé.”

So would we, Tiffany!