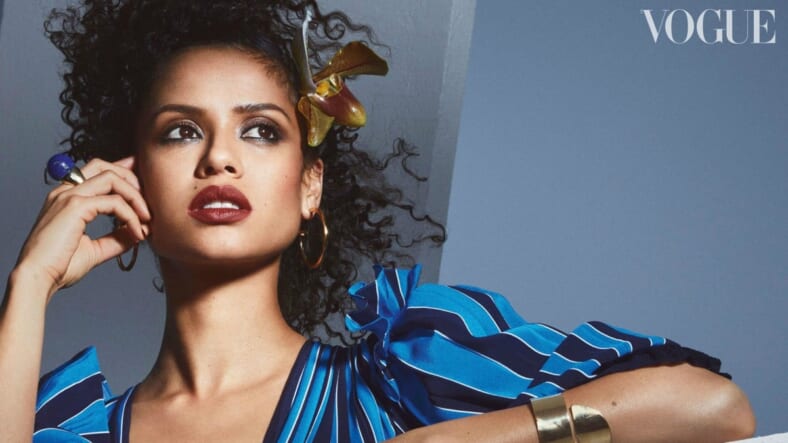 Gugu Mbatha-Raw has quite a month ahead of her. She co-stars in Ava DuVernay’s science fantasy adventure film A Wrinkle In Time which opens in theaters nationwide this Friday, March 9 and she’s on a roll when it comes to press stops.

But of course she made significant time for Vogue who decided to put the talented beauty on cover of their April 2018 issue.

PHOTOS: STARS SHINE BRIGHT AT “A WRINKLE IN TIME” PREMIERE

In the feature article, Gugu, short for Gugulethu meaning “our pride” in Zulu, details what it meant for her to have the experience of working with the first woman of color to direct a film with a $100 million budget:

“The chance to work with Ava again, and what it means for a woman of color to be directing something of that scale and budget for Disney — I wanted to be in that line,” Mbatha-Raw told Vogue.

Mbatha-Raw also discussed what it was like to share a space and even a bonding moment with Mrs. Which in the film, also known as Oprah.

“We were both on the set on the same day and she came and hung out in my trailer for a little bit and we had a chat, in her full character regalia,” Mbatha-Raw recalled, “which is just goddess-like.”

“I hope we actually get to do something where we work together in a scene because that’d be incredible. I feel so thankful to have her in my life and to have had her guidance. She’s a very special human.”

Speaking on her career, she spoke pointedly about the roles she chooses and what her personal mission in the world of is— far from being a typecast character.

“I didn’t really see how I could be in a period drama without playing a slave, necessarily, or a character in a very subservient or brutalised role,” Mbatha-Raw said about how she surprised herself as the lead role of Dido Elizabeth Belle in Belle (2013).

“As a biracial woman born in the 1980s, if you let popular culture dictate it, you’d think mixed-race people were like a new thing,” she continued. “And that’s absolutely not the case. People of color have existed throughout history – it’s just who has been able to tell the stories. And that to me became really important: to illuminate that. To show that Dido Elizabeth Belle is as valid a story as Elizabeth Bennet… And, you know, Elizabeth Bennet’s fictional.”

It is anticipated that A Wrinkle In Time is another one of those magical moments in Mbatha-Raw’s career.

Read the full interview with Mbatha-Raw in the April issue, which is out on newsstands on the movie’s release date, March 9.