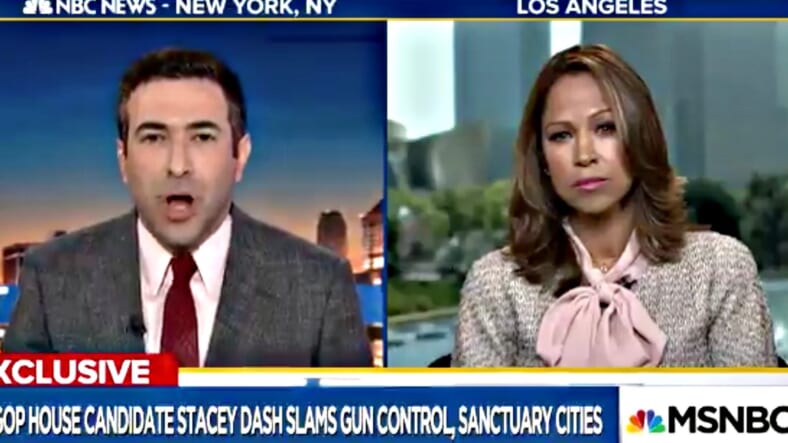 The Clueless star announced she was running under the slogan “Dash to DC” for the seat currently occupied by Rep. Nanette Barragán. California’s 44th Congressional District has been a Democratic district since 2012 and includes North Long Beach and Compton, according to The Hill.

Dash seemed to think that the political run was a good idea, even taking the question of her own candidacy to Twitter to see what the people thought.

“A number of people online and off have suggested I run for political office,” she wrote. “I wanted to see what my online community thinks of this idea as I mull the possibilities. Thoughts?”

Well, after seeing today’s interview with MSNBC’s Ari Melber some constituents may reconsider who they are going to vote for in the congressional race.

At the end of the interview where the conservative actress turned congressional candidate discussed her campaign, Melber asked, “Ms. Dash are you a Clueless person or a Legally Blonde person?”

Her answer: “Of course, I’m a Clueless person!”

Given how easily Stacey Dash walked right into Ari Melber’s trap could she really manage to win a congressional race?

Clearly in the age of Donald Trump anything is possible.

But considering the fact that the district she’s running in voted overwhelmingly for Hillary Clinton during the 2016 election, this is going to be a hard, if not impossible, sell for Republican candidate Dash. After all, she was a Fox News contributor for a while until 2016. She didn’t get a contract renewal following a segment in which she cursed while discussing President Barack Obama and his attitude toward the war on terror.

“I didn’t feel any passion from him,” she said at the time. “I feel like he could give a shit, excuse me, he could care less.”

It looks like Dash is going to have some stiff competition in her run for Congress.

It is being reported that Compton Mayor Aja Brown will announce on Thursday that she is running for Congress in the 44th District which covers Compton, Watts, San Pedro and North Long Beach.

Even though Brown is easily one of the most popular politicians in Southern California, sources say she had no intention of throwing her hat in the race until the day Dash announced her own bid for a seat in the House of Representatives.

After finding out the former actress-turned-Fox News correspondent’s plans, several members from the California Congressional delegation allegedly contacted Brown to run against Dash. And it appears she may be taking their call to action seriously.

While there’s no guarantee that Brown will win – she will definitely give the Clueless star a run for her money.