EXCLUSIVE INTERVIEW: Mother of little girl who met Michelle Obama talks to The Grio about their unforgettable afternoon

Her mother explains how, at just 2-years old, her daughter is already living her best #BlackGirlMagic life. 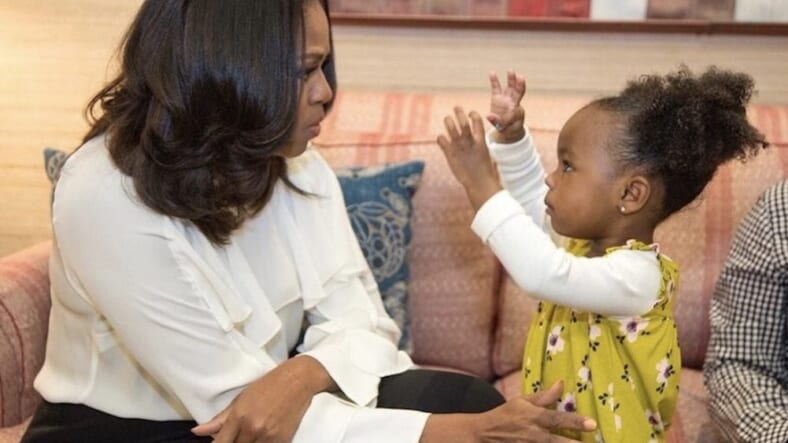 When Jessica Curry took her 2-year-old daughter, Parker to the Smithsonian National Portrait Gallery in Washington, D.C., a museum that they have visited many times before, she never expected her little girl would become a viral sensation and an inspiration to people all over the world.

After Parker stood in front of the now infamous portrait by artist Amy Sherald of former First Lady Michelle Obama, Ben Hines, who stood in line behind the Curry family, captured Parker gazing at the portrait in awe and posted the image on Facebook. The sweet photo was continously reshared and eventually ended up in front of Mrs. Obama.

On Tuesday morning, Parker and her family experienced a moment of a lifetime when they received an invitation to meet the former First Lady at her D.C. office. Still a toddler, Parker is already living her best #BlackGirlMagic life sharing a dance and many hugs with Mrs. Obama during their visit.

TheGrio caught up with Jessica (who has been inundated with media requests for her new superstar daughter) about Parker becoming an internet sensation, the power of Black woman iconography and what it was like hanging out with Queen Michelle.

Jessica Curry: Mrs. Obama’s team reached out to us directly. They said that she really wanted to meet Parker. Of course, I wasn’t going to decline their request. To even get that phone call and hear that our former First Lady wanted to meet my 2-year-old daughter was was extremely mind-blowing, overwhelming, and humbling.

We feel honored and humbled that this picture of Parker has gone viral and inspired and touched so many people. We also feel honored that Mrs. Obama wanted to reach out and talk to her, spend time with her, and encourage her in the same way that I do. She told her that she was beautiful, she was smart, and she could be whoever she wanted to be. It was a wonderful experience and one that I am so looking forward to sharing with Parker when she can fully grasp it because right now, she’s just like, ‘Oh I saw the Queen.’

TheGrio: What did they do during the meeting?

Jessica Curry:  When Parker first saw Michelle Obama, they hugged. There were a number of people standing there, but Parker was trying to figure out what was going on. When she realized it was the same face as in the portrait, she was like Oh, this is her in the flesh! She was a little caught off guard, but just so pleasantly surprised and pleased. Mrs Obama is a wonderful woman and more than I ever imagined. She’s so sweet, so humble, so laid back and warm. We really enjoyed the time we spent together.

VIDEO: Watch Michelle Obama dance with the girl who stared at her portrait and called her a queen

TheGrio:  What made you decide to take your daughters (Parker and her little sister, Ava) to the Smithsonian National Portrait Gallery?

Jessica Curry: We’ve been there many times before and we frequently go to other local art installations. Since the girls aren’t in traditional preschool, I’m always trying to give them opportunities in art. We specifically went that day because I wanted them to see the new portraits of Michelle and Barack Obama.

TheGrio:  What were you thinking when you noticed Parker staring at Mrs. Obama’s portrait?

Jessica Curry: I was really looking forward to seeing the portraits myself and it was exciting for me to be able to take Parker and for her to see this woman who looks just like her and has achieved this incomparable accomplishment. I’m always trying to create opportunities for Parker to see women of color in positions where they’ve achieved greatness. I want her to understand and believe that she can do anything she wants to do and be whoever she wants to be. My goal is to inspire her to be great. I want her to know that there is no set limitations or boundaries of what she can do or who she can be.

TheGrio:  Why do you think the photo made such an impact with people?

Jessica Curry: People can see that if we can instill in our little people that no matter what’s going on in the world, nothing can limit them from being who they want to be and achieving what they want to achieve. That’s really the most important thing that I feel should be taken from the photo.

TheGrio:  What do you want Parker to remember most from this experience?

Jessica Curry: My wish is that she remembers how profound of an impact she made on so many people around the world. It’s bigger than her; it’s about all of our youth, children, and little people and instilling in them that it doesn’t matter where you come from and what you have, you can do anything. You can be anyone. You can achieve greatness. I hope she looks back and she is like, ‘wow, I touched and inspired so many people.’

Follow Jessica Curry on her blog, “Happy Momma, Happy Babies,” which is based upon her experiences as a mother of two.