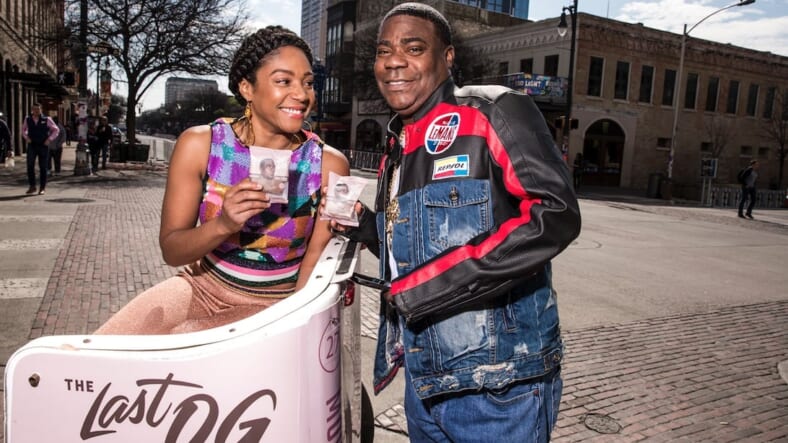 Tracy Morgan is ready to continue his triumphant return to television with his hilarious new series, The Last OG.

The comedy co-stars Tiffany Haddish and premieres April 3 on TBS.

TheGrio caught up with Tracy Morgan to find out why we should all be tuning in.

“It’s refreshing. You can expect a little bit of everything,” Tracy Morgan said of the show. “Drama, comedy, you know what it is. It’s part of my life. You can expect truth. That’s what Richard Pryor gave me.”

We also found out how he maintains his sense of humor despite major setbacks, like the 2014 crash that claimed the life of his friend, Jimmy Mack and left Morgan in a two-week coma with major injuries.

“If you don’t laugh, you’re gonna cry,” he said. “Don’t ever take life too seriously or you will never get out alive. That’s my advice to young people.”

The Last OG was created by Oscar-winner, Jordan Peele and John Carcieri and will also star Cedric The Entertainer and Allen Maldonado.

An ex-felon is shocked to see just how much the world has changed when he is released from prison for good behavior after a 15-year stint and returns to his newly gentrified Brooklyn neighborhood.

The Last OG is just one of the projects Tiffany Haddish is working on these days. The comedienne continues to win and has booked several gigs recently, including the Tyler Perry‘s film, The List. She has also signed on to star alongside Melissa McCarthy in the upcoming crime drama, In The Kitchen as well as Kevin Hart‘s next movie, Night School.

She will also lend her voice to a forthcoming animated series, Tuca and Bernie, on Netflix and let’s not forget she recently wrapped work on The Oath and is gearing up to executive produce and star in Paramount’s The Temp.