As part of our #GrioHerStory, we look at ten Black women who walked 100 miles in five days to promote a lifetime of health living. 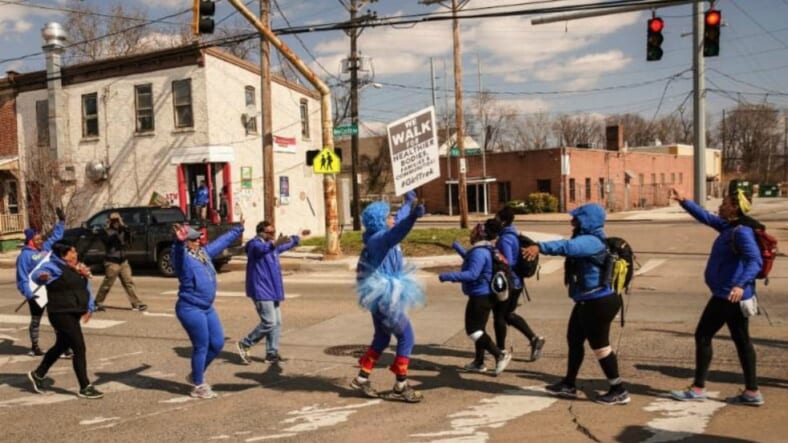 It was no easy feat, but last Saturday, 10 Black women walked the path of Harriet Tubman’s first great escape along the eastern shore of Maryland. Their goal was to bring more attention to health disparities that continue to adversely affect Black women and girls.

Led by GirlTrek, a health movement for African-American women and girls is also grounded in civil rights history and principles through walking campaigns, community leadership, and health advocacy. The women started their journey on International Women’s Day and finally crossed the Mason Dixon Line into Delaware on March 10th also known as Harriet Tubman Day.

The women of #HarrietsGreatEscape are still in awe of their 100 mile experience. “I can’t believe I just spent five days walking 100 miles to pay tribute to the most courageous person who ever lived: Harriet Tubman,” says Jewel Bush, director of communications for GirlTrek.

“I will never look at distance the same or going to the bathroom the same,” she shares. “While I had to take every step on my own, as an individual, it was my team of GirlTrek sisters who motivated, challenged, pushed, loved and nurtured me the whole way through. Without them, I would not have even considered walking the Underground Railroad. And without them, I never would have crossed the finish line.”

Why honor Harriet? For founders Vanessa Garrison and Morgan Dixon, it’s really a question of “why not?”

“When Morgan and I were talking about the problems that our community was facing, that our families were facing, and we were facing personally, we looked to Harriet Tubman as an example of an individual woman who had liberated herself through walking with her own efforts, and with her own two feet,” shares Garrison.

“She made courageous choices to leave her family, and her husband behind. She then became a powerful organizer and went back over and over again to get friends and family. The entire story became the foundation and a blueprint for how we can organize a million Black women. Which was the first walk in the direction of our destiny.”

After Garrison saw her grandmother die at the age of 66, her aunt at 55, and another aunt at 63, she realized her experience wasn’t unique to just her own family. She called on her longtime friend, Dixon, and they realized that heart health and obesity is an epidemic that has plagued our communities for far too long.

What soon followed was the birth of GirlTrek. Now, hundreds of thousands of Black women later, they are saving lives and have created a new goal to get one million women walking by the end of 2018.

The biggest hurdle in living a healthy lifestyle for many Black women is letting go of the “saving” mentality. Unfortunately, for generations, we have learned to save everyone else besides ourselves.

“It’s about shedding the idea that we are not worthy of the time to invest in ourselves,” said Garrison. “We have been celebrated for service to others, over care for ourselves, for so long. To the point where I actually think black women feel guilty about taking time for themselves.”

The benefits are beyond what you imagined

The recipe for a better life is simple. It starts with taking the first step as Garrison explains, “The first thing we ask is for them to dedicate 30 minutes a day to self-care, and that 30 minutes looks like walking,” she said.

“Once you’ve actually realized that you’re worth the time, then you’re like llet’s do this in small chunks,” advised Garrison. “It doesn’t need to be an overwhelming where you’re joining a CrossFit gym and running a marathon tomorrow. That’s the beauty in walking for 30 minutes a day, which is actually the most powerful thing a woman can do for her health.”

Garrison points out that walking is one of the only activities that offers a multitude of benefits beyond the physical. Also, you can do in your own neighborhood, it’s affordable and accessible and most of all, it’s something you can bring friends and family to do.

For more information on GirlTrek and their mission to get one million women walking, visit girltrek.org