OPINION: For Democrats, the future of the party is in Stacey Abrams and her run for governor of Georgia

Bakari Sellers gives his take on how Democrats can make the South politically competitive again. 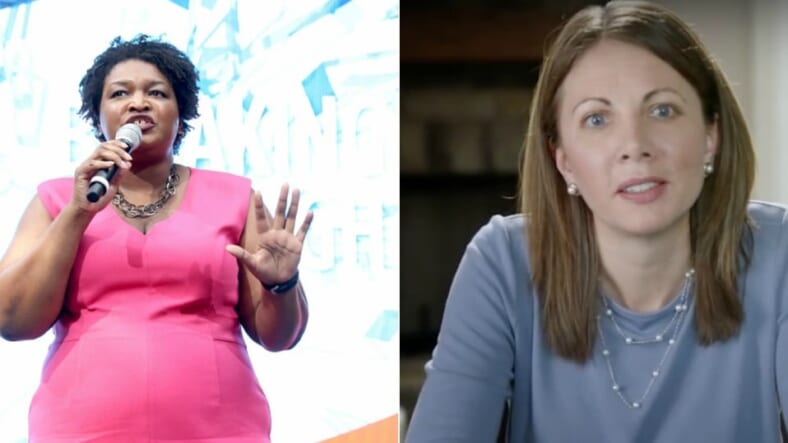 Stacey Abrams (left) and Stacey Evans are both running for governor of Georgia. (Photo OF ABRAMS by Paul Zimmerman/Getty Images For EMILY’s List and Evans is Courtesy of her campaign video.)

If you are a Democrat who cares deeply about the direction of the party, then Georgia should be on your mind.

Evans and Abrams are running distinctively different campaigns, which is affirmed by their recent disclosures. Evans reported raising $2.3 million with $1.5 million in cash on hand, including a $1.25 million-dollar personal loan. Abrams raised just over $2.2 million with $461,366 of cash on hand.

How to win elections

Many insiders and journalists assessed the latest cash-on-hand figures and have concluded that the Abrams campaign has a serious fiduciary problem, but nothing could be further from the truth.

This narrative unfairly penalizes Abrams for running the type of campaign that Democrats have to run in order to win, particularly those in the South. It also rewards an antiquated Democratic campaign playbook that we know doesn’t win elections and fails to build the grassroots infrastructure that can set the stage for future success of the party in the South.

Evans is running a classic raise and hold strategy. The game here is to raise as much as you can (and loan yourself as much as you can afford), hoard cash to attract favorable press, and create the appearance of viability for the purpose of massive media buys.

There is a growing body of evidence that has found that costly media buys are the most expensive and often the least effective means of reaching voters. This is particularly true when you consider that millennials – a voter block that Democrats must pursue in order to win – watch less television and are thus less likely to be persuaded by television and radio ads.

In contrast, Abrams is running a nontraditional campaign that is heavy on grassroots organizing and voter contact. She has been unapologetic about engaging a traditional Democratic base of voters as well as infrequent voters. We witnessed this kind of campaign work just months ago in Alabama. Senator Doug Jones won because of comprehensive grassroots outreach that mets voters in their communities and on their doorsteps. And, I believe that’s how we’ll be competitive in the South again.

Executing an effective and robust voter contact strategy requires lots of upfront spending on paid staffers tasked with engaging voters, collecting voter data, and organizing volunteers. To attract infrequent voters, a campaign must make a clear case for why your vote truly matters. This type of persuasion won’t happen during a This Is Us commercial break.

There are almost one million unregistered voters and thousands of infrequent voters in Georgia. When you include the state’s Democratic-leaning voters in this equation and the fact that Democrats have consistently lost statewide races by about 200,000 votes it’s clear that the prospect of turning Georgia purple lies in Abrams ability to crack the code.

The future of the party

Abrams is running the kind of campaign that Democrats need in order to build out the test case for the future of Democratic campaigns in the South and to set the stage for 2020.

When political reporters in Georgia question the financial viability of the Abrams campaign it presents voters and donors with a distorted view of what matters. Obsessing over cash on hand without a full consideration of the kind of campaign Abrams is running or taking stock of what winning campaigns are doing does everyone a disservice.

READ MORE: THREE THINGS DEMOCRATS HAVE TO DO DIFFERENTLY IN 2018

For the records, I have never met Stacey Evans, but I have seen the campaign she’s running before. Unfortunately, we all know how this story ends. We can’t afford anymore campaigns that rely on stockpiling cash, that favor media buys over building real grassroots enthusiasm or that woos Black voters with tone-deaf appeals.

Furthermore, campaigns like Evans’ fail to leave behind a grassroots infrastructure that can provide the foundation for future wins. They do not register new voters or engage infrequent voters. Nor do they invest in the voter contact data or cultivate the campaign operatives and volunteers that other races can leverage down the road.

It is time for Democrats to retire the old playbook, and that starts by telling campaigns like Evans’ “thanks, but no thanks.” Instead, try embracing future-oriented campaigns like the one Abrams is running.

As someone fully invested in making the South competitive again for Democrats, Georgia and Stacey Abrams are on my mind. And, they should be on yours, too.

Bakari Sellers is a former Democratic member of the South Carolina House of Representatives and a CNN commentator. Find him on Twitter @Bakari_Sellers