He tried it but an anonymous tipster named him as the assailant. 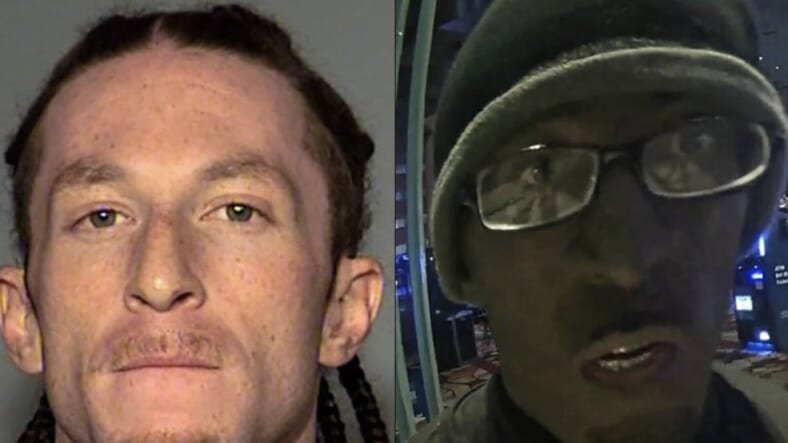 Cameron James Kennedy is charged with robbing at gunpoint a cashier cage at the New York-New York Casino in Las Vegas on Jan. 10, 2018. Initially he was described as a black male, but police said Kennedy used makeup to appear in blackface. (Provided by the Metropolitan Police Department)

There’s confidence— and then there’s idiocy, but a combination of the two never ends well.

Cameron James Kennedy, a 26-year-old white man, who is charged with allegedly robbing the New York-New York Casino located on the Las Vegas strip— dressed in blackface, according to The Las Vegas Review. Kennedy has been charged with a federal criminal complaint of robbery and currently faces up to 20 years in prison.

Kennedy was already under federal investigation based on previous bank robbery charges, so authorities say he decided to do something different this time. According to the filed complaint, he cut off his GPS house arrest monitoring bracelet and robbed the casino during the morning hours of January 10.

Upon entrance, Kennedy reportedly found a cashier, told her “I want all your hundreds, and don’t mess around,” and fled the scene with $23,000 in a taxi cab.

Kennedy, dolled up in makeup, did so to appear as a Black person. The cashier, who was protected behind a cage, told police officers that she wasn’t fooled. She commented that his skin tone was “off” and looked “blotchy,” so she knew he wasn’t actually a person of color. However, initial reports of the robbery labeled the culprit as a Black man.

The happy-go-lucky criminal must have been satisfied with his work because he went on a celebratory shopping spree. Court records say that Kennedy then bought a gold bracelet for $1,500, money orders of more than $1,800, and a pre-paid debit card for $1,000 in someone else’s name.

About 15 days later on January 15, due to an anonymous tip which directly named him as the assailant, Kennedy was arrested. Additionally, phone records place him near the location of where he was reportedly dropped off from the taxi.

A month later, an eye-witness told authorities that they had seen Kennedy enter their apartment building on the day of the robbery dressed in all black clothing— and appearing in blackface didn’t help, either.

“Kennedy’s face also appeared darker than usual as though he had wiped something off of his skin,” the complaint read.

The witness also reportedly identified Kennedy as the man in the surveillance photos.

Kennedy had just been released from prison in June, following a 2012 guilty plea to two bank robberies. However, Kennedy had been arrested again just six months later for allegedly trying to cash an altered check at a casino.

Following his run-in with the law in December, his probation officer and the court agreed that he be placed on house arrest.

During his court appearance on Monday, Kennedy was reportedly retrained by leg straps. His court hearing for this case will be March 26.