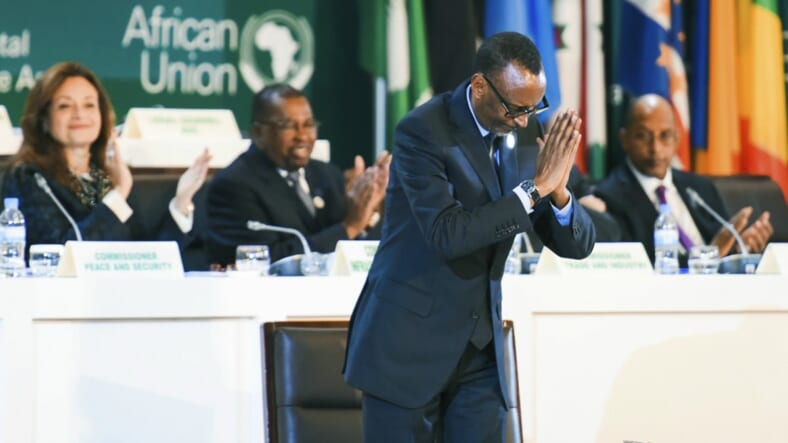 Rwanda's President Paul Kagame, who is also the current chairman of the African Union, gestures after signing the African Continental Free Trade Area (CFTA) Agreement during the 10th Extraordinary Session of the African Union (AU) in Kigali, Rwanda, Wednesday, March 21, 2018. African leaders on Wednesday signed what is being called the largest free trade agreement since the creation of the World Trade Organization. (AP Photo)

KIGALI, Rwanda (AP) — African leaders on Wednesday signed what is being called the largest free trade agreement since the creation of the World Trade Organization.

The deal creates a continental market of 1.2 billion people, with a combined gross domestic product of more than $3.4 trillion. A major goal is to boost intra-African trade and rely less on the volatility of commodity prices that affect many exports.

The aim is to have agreement, signed by 44 of the African Union’s 55 member states, enter into force by the end of this year, said the chair of the AU Commission, Moussa Faki Mahamat. States now must ratify the deal, but the number of countries needed to put the agreement into force has not yet been agreed upon.

“Our peoples, our business community and our youth in particular cannot wait any longer to see the lifting of the barriers that divide our continent, hinder its economic takeoff and perpetuate misery, even though Africa is abundantly endowed with wealth,” Mahamat said. He urged strong follow-up to “confound those who, outside Africa, continue to think, with barely concealed condescension, that our decisions will never materialize.”

Concerns remain. The president of Nigeria, one of Africa’s largest economies, skipped the summit amid trade unions’ objections.

“We will not agree to anything that will undermine local manufacturers and entrepreneurs, or that may lead to Nigeria becoming a dumping ground for finished goods,” President Muhammadu Buhari said through his office.

And while Africa’s largest economies are expected to benefit most from the deal that progressively eliminates tariffs and other trade barriers, some of them worry that more people from poorer countries will migrate their way.

But some of the continent’s strongest and fastest-growing economies, including Ghana, Kenya and Ethiopia, signed the deal. South Africa’s new president has expressed support but his signing was not announced during the event.

“Africa is stronger when we work together,” said Niger’s President Mahamadou Issoufou, who led the free trade effort.