The Kings' victory over Atlanta was in a near empty arena. 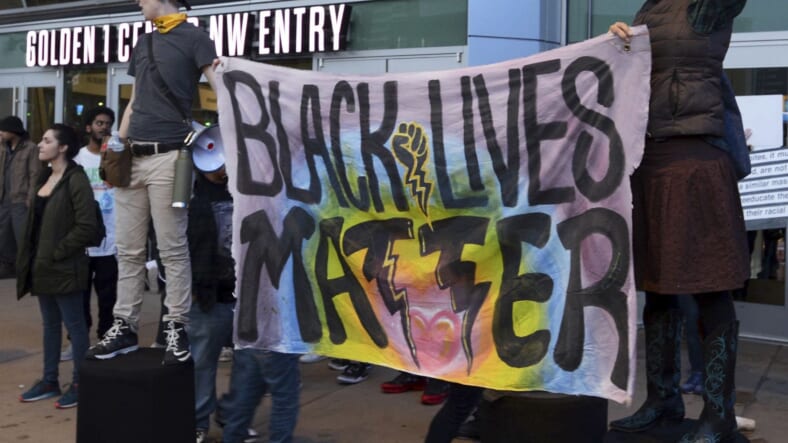 Black Lives Matter activists linked arms and prevented entry into Golden 1 Center, the home court for the Sacramento Kings. The purpose of the action was to protest the death of Stephon Clark, an unarmed Black man who was shot to death by police in his own backyard on March 18.

Police who were in the area searching for a suspect breaking car windows, reportedly mistook Clark’s cellphone for a gun and opened fire–killing the 22-year-old father of two in a hail of 20 bullets.

During the protest on Thursday night, protesters chanted “Join us or go home,” and that’s basically what happened. The Sacramento Kings defeated the Atlanta Hawks in a nearly empty arena. Most ticket holders were unable to gain entry.

Sacramento ACT community organizer Ryan McClinton told theGrio in an exclusive interview, that the shutdown had a strong message.

“Getting people to understand the disruption our lives take on; that we’re not able to move normally after a shooting like this,” says McClinton.  “If that small moment hurt peoples feelings then oh well, because we live in that pain and walk in that pain.”

-#BlackonBlue: 7 things to know about the fatal police shooting of Stephon Clark-

The Sacramento Police Department tweeted that they were no longer allowing entrance into the arena. They did not specifically attribute the action to the protest, but noted “unforeseen circumstances.”

Due to unforeseen circumstances around Golden 1 Center, no one else will be admitted to the #SacKings game. #SacPD

According to CNN, the NBA and the Kings were the ones who decided to bar further entry into the arena. No arrests were made.

“On Sunday we had a horrific, horrific tragedy in our community.We at the Kings recognize people’s ability to protest peacefully and we respect that. We here at the Kings recognize that we have a big platform. It’s a privilege, but it’s also a responsibility. It’s a responsibility that we take very seriously. And we stand here before you — old, young, black, white, brown — and we are all united in our commitment,” said Ranadivé.